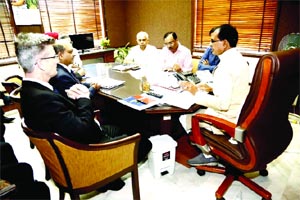 Chronicle Reporter, Bhopal Managing Director of VE Commercial Vehicle Limited, a joint venture of Eicher and Volvo Group Vinod Agarwal today met Chief Minister Shivraj Singh Chouhan at his room in Vidhan Sabha. He told the Chief Minister that his company was going to start a commercial vehicle manufacturing plant at Bagroda in Bhopal next year with an investment of Rs 500 crore under its expansion programme. The company has made an investment of about Rs 4,000 crore already in the state. During the discussion Agarwal told the Chief Minister that land had already been purchased for the plant in Bhopal and production will start by coming October 2019. Nearly 25 thousand persons have been given employment in his industry set up in Pithampur. CM Chouhan said that the environment for investment in the state is congenial. Several big industries are coming in the state. State government’s policy is that of Udyog Mitra. During the discussion Chief Secretary B.P. Singh, Principal Secretary Commerce and Industry Mohammed Suleiman, Principal Secretary to Chief Minister S.K. Mishra, Ashok Vernawal and Vivek Agarwal, Management Director of TRIFAC D.P. Ahuja besides Rajendra Sachdeva and Anders Heather of VE Commercial Vehicle Limited were also present.