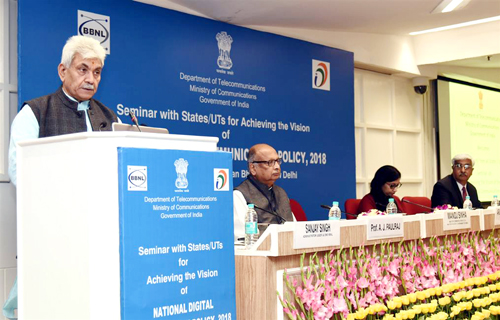 New Delhi, The National Digital Communications Policy 2018 will catalyse the achievement of the Narendra Modi government’s Digital India dream by nurturing and promoting a robust, competitive and sustainable digital communications sector, Union Communications Minister Manoj Sinha said on Monday. Mr Sinha said the policy, with an aim of broadband for all and creating four million jobs in the sector, has the potential to drastically alter the dynamics of the field and make it possibly the single-most important enabler of socio-economic development of the country. The Minister was speaking to media after inaugurating a seminar organised by the Department of Telecom. The seminar is meant to lay the foundation for collaborative pursuit and realisation of the vision, mission, and objectives of the Policy. He cited the ongoing BharatNet project as an example of how determined execution can lead to empowerment of people inhabiting the remote and rural areas of the country. “We have broadband-enabled nearly half the total number of gram panchayats in the country, and phase II of the project is now in progress. In parallel, we are also establishing WiFi hostpots at each gram panchayat to facilitate the utilisation of the infrastructure established by BharatNet,” he added. Urging the states and union territories representatives to leverage the digital communications infrastructure to provide services which will make a substantive difference to the lives of the people, the Minister said, “Cooperative federalism is not an empty slogan for us; it is a way of working with stakeholders to maximise the returns from our collective efforts and investments.” Telecom Secretary Aruna Sundararajan highlighted the importance of proactively identifying and addressing implementation challenges, in order to support timely execution of projects. She highlighted the Indian Telegraph Right of Way Rules 2016 as an instrument to facilitate smooth execution of digital communications projects across the country through adherence to a clear, transparent and consistent set of rules. “We will also take steps to promote healthy competition among states and union territories to further the cause of NDCP 2018,” Ms Sundararajan said.