Concessions and rewards on use of net banking 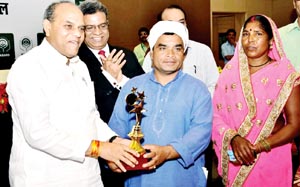 Chronicle Reporter, Bhopal, District Collector Sudam Khade has said that district administration would issue instructions to the traders and businessmen to promote cashless payment. Special concessions and rewards would be given to customers for using Internet banking and paying through paytm. He urged people to use digital payment mode to avoid cash transactions. Khade said various businessmen and firms deal in cash in a bid to evade tax but it is not good for administration as tax money is used for the benefits of general public only. He urged people to use digital modes of payment and avoid dealing in cash. Collector said that using digital payment modes people will be able to avoid the chances of tax evasion and it will surely reduce black money. Khade was addressing a meeting convened to promote Digital India. Collector mentioned about the beneficial schemes in digital payment systems. He said Paytm, BHIM application, credit and debit cards etc allows discounts and promotional benefits for the users. Also these payment modes are safe and easy to use. He said that Prime Minister Narendra Modi launched Digital India campaign to ensure that citizens get better and improved Government services. Also he wanted people to keep their money safe and secure. Collector got apprised about the hassles faces by people in making digital transactions. He directed his subordinates to solve such problems as early as possible. He directed authorities to organise seminars, public meetings and other promotional events to encourage people for digital transactions. Collector asked the officials to resolve the problems arising in digitalised pay system a sking them to discuss those problems and its solutions in next meeting.