Cong gears up for LS polls with fresh and positive stance 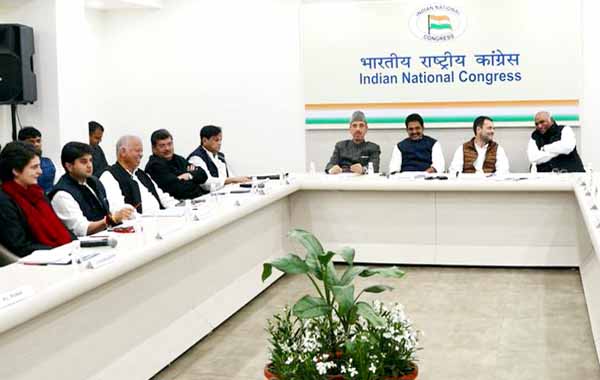 Youths, women to get precedence in the forthcoming elections Pravesh Kumar Mishra, New Delhi, Congress is gearing up for Lok sabha polls. The party is in aggressive mood following the success in three assembly polls. It is expected that the party would announce the name of candidates before time and field young and energetic persons and also give chance to females. The election battle is likely to be interesting and decisive. Sources revealed that Rahul Gandhi has asked all in-charge general secretaries to prepare for LS polls on war footing.He said we have to make honourable alliance with parties of similar ideologies in states and play on front foot. Rahul said this in an important meeting of in-charge general secretaries of states. Priyanka Gandhi Vadra was also present at the meeting. Party’s media in-charge Randeep Surjewala said the party would follow balanced approach that is there will be both young and experienced candidates in the field. The party will field youts, woman and persons of deprived communities. Congress is treating it as an opportunity for itself. It is being vocal and opposing the BJP so that a strong atmosphere can be prepared against it in the coming elections of 2019, but the party realizes that it cannot challenge the BJP on its own. Therefore, Congress is in favour of an alliance with secular parties. The real test of Rahul Gandhi will be in how much it is possible to unite anti-BJP forces under the leadership of the Congress. Regional parties want to move forward in their own way. Some of them avoided Congress. Rahul repeatedly talks about strengthening the organization, but the organizational structure of the party is not very strong at the grassroots level. If Rahul could do some strong work in this direction, then it would be important for the party. The atmosphere of elections is being formed in the entire country; although the current defeat of the BJP in three states is being linked to the BJP’s reducing popularity, The Prime Minister is still the most favourable politician of the nation and the biggest challenge in front of the opposition is to find a face that can stand against Narandra Modi and win the elections. Rahul Gandhi may have gained reputation as the congress head but the journey is quite long.