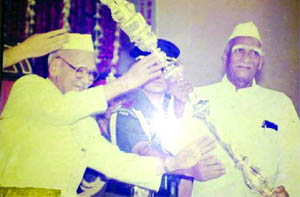 Chronicle Reporter, Bhopal State Congress leaders observed a two minutes silence to pay homage to Sriniwas Tiwari who was seven times MLA from Mangawan constituency in Rewa. The former speaker was rushed and admitted to the Sanjay Gandhi Memorial Hospital in Rewa on Tuesday after he complained of respiratory problems. His condition deteriorated and he was taken by road from Rewa to Satna and then flown in an air-ambulance to New Delhi and admitted to the All India Institute of Medical Sciences (AIIMS).

State Congress office said that his body would be flown to Satna from New Delhi by a special chartered flight and then taken to Rewa by road on Saturday. Last rites will be held in his village Tivani in Rewa district at 10 am on Sunday. All top state Congress leaders including AICC general secretary Digvijaya Singh is expected to attend the cremation. Tiwari was a prominent name in socialist movement Shriniwas Tiwari was a prominent name in a socialist movement in the late sixties and early seventies in the Vindhya region of the state. In 1972, he entered the state assembly for the first time as a Samajwadi Party legislator. Next year, a number of socialist leaders joined the Congress including Motilal Vora and Shrivas Tiwari. He was elected again in 1977, 1980, 1990, 1993 and 1998. He was Speaker of the state assembly from 24 December 1993 to 11 December 2003. He advocated the separation of Vindhya Pradesh Region as MP. He belonged to Tiwni village near his former constituency Mangawan in Rewa district. He lived in Amahiya locality in Rewa. Tiwari was a freedom fighter and a lawyer. He was MLA and Minister beginning in 1956 when Madhya Pradesh state was formed.At that time he was one of the few young members of the legislative assembly.He is known as white tiger of M.P. He is also known as Dada.He lost the seat in Sirmour assembly seat for Rewa in Madhya Pradesh Legislative Assembly Election 2008. Was nicknamed the White Tiger Tiwari was nicknamed the White Tiger because of his attire and aggressive nature. His hair and moustache was as white as his signature dhoti and kurta. During the Digvijaya Singh regime, it was often claimed that alongside Diggy Raja’s government ran a parallel “Amahiya Sarkar (or the government of Amahiya - the place in Rewa where Tiwari lived). White Tiger Tiwari redefined the post of Speaker as never before and displayed its strength. His tenure as Speaker was controversial and later in the BJP government Tiwari found himself in trouble more than once. The latest was in February 2015 when the Shivraj Singh Chouhan government filed an FIR against Digvijaya Singh and Shriniwas Tiwari in an assembly secretariat recruitment irregularities case. However, no chargesheet was filed. CM Chouhan expresses grief Chief Minister Shivraj Singh Chouhan has expressed profound grief over the demise of Former Speaker of Assembly, Shriniwas Tiwari. In his condolence message, Chouhan said that Tiwari was an expert of parliamentary affairs. He has significant contributions in the development of the state. Chouhan has prayed to the Almighty to grant peace to the departed soul. He has also extended heartfelt condolences to the bereaved family.