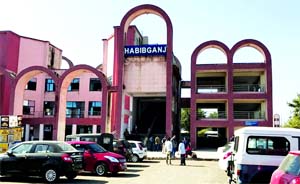 Chronicle Reporter, Bhopal Congress on Monday has protested against the steep increase in parking charges at Habibganj Railway Station. There has been a six-fold increase in parking charges. Party district president PC Sharma said that in the name of parking people are being fleeced and illegal recovery is being done. He demanded immediate withdrawal of the hike. The party has submitted a memorandum to the Sub-Divisional Magistrate (SDM) in this regard. The party workers said that hike cannot be justified. He said the visitors come to drop their relatives or friends and have to park their vehicles at the railway station. Besides the travelers who travel daily to nearby places like Itarsi and Hosangabad have started feeling the pinch. Railway department officials said the hike in the parking charges is on account of the National Urban Transport Policy of 2006. The rise is to balance the income generated from rent and the actual cost of the land. Corporator Guddu Chouhan said the parking charges have been increased but when it comes to the safety of the vehicles still no proper measures are been taken. If anything happens to the vehicle or any personal belongings are stolen from the vehicle, no one will take the responsibility for the issue even after the hiked prices. Members of District Congress Women wing Santosh Kasana, Aanand Taran, Aamir Khan and other members were also present in large number during the protest at the Habibganj railway station. The parking rate for 24 hours parking for two-wheelers now is Rs 235 and for four-wheelers has been hiked to Rs 590 from Rs 100.