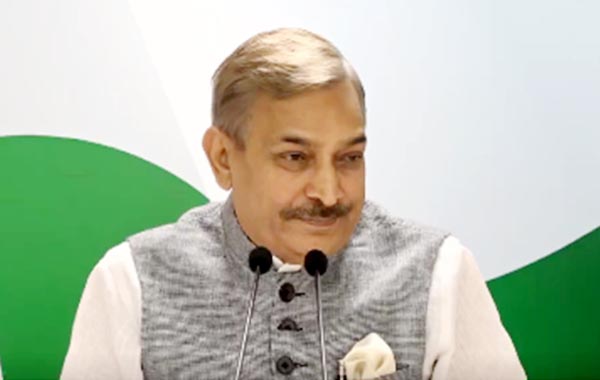 New Delhi, Taking on the Narendra Modi government for the increasing number of lynching incidents, the Congress party on Monday alleged that the Union government is continuing to maintain a‘criminal silence’ and that under its rule, the country has turned into a mobocracy, where anarchy prevails. Addressing mediapersons here, Congress spokesperson Promod Tiwari, along with Priyanka Chaturvedi, said that under the watch of the Prime Minister, the country has seen more than four and a half times rise in attacks and a twofold rise in deaths due to mob lynching in 2017. “Since January 2018, 61 mob attacks sparked by rumors circulated on social media have been reported and this trend is growing by the day. Mob lynching on the basis of rumors has become the norm of the day where people have started believing that they can take law and order in their own hands and dispense instant justice on basis of mere rumors”, said Mr Tiwari. Pointing out that maintaining law and order is the elected government’s responsibility, Mr Tiwari further said these growing incidents of violence show that people have lost their faith in the BJP government. “Mr Modi’s criminal silence on the growing incidents is deafening. The tacit support offered by the BJP to those accused and convicted of such crimes is more than evident when the Minister of State for Civil Aviation, Jayant Sinha garlanded those convicted in the Ramgarh mob lynching incident”, added Mr Tiwari. Referring to the incidents where Union Ministers are involved, Mr Tiwari said Union Minister Giriraj Singh visited those accused of inciting communal violence in jail in Bihar and another Union Minister Mahesh Sharma was seen draping the coffin of the accused in the Dadri lynching case with the tri-colour. “Through this tacit support, they are abetting such hooligans to take law and order in their own hands and believe they will be protected by the government of the day”, said the Congress spokesperson. Mr Tiwari alleged that the BJP President Amit Shah, has refrained from taking action against any of these Ministers and BJP members, who continue to support such hooligans through statements and such acts.  “Those who stay silent and act as mute spectators, will be considered complicit in these crimes”, he added. He alleged that, instead of holding themselves responsible and accountable, the government has totally absolved itself through its Minister Ravi Shankar Prasad, who conveniently blamed the social media platforms for their own misdeeds. Mr Tiwari also referred to the murder of convict Munna Bajrangi inside Baghpat jail in Uttar Pradesh and said, “the real state of law and order is not hidden from the people of this country and is reflected in a brazen manner by this brutal murder”. He added that it is no surprise that the BJP MP from Kurukshetra, Raj Kumar Saini said that 90 percent of the BJP candidates will lose in upcoming polls because the Modi Government has neither the right intent nor the right policies. “When will Prime Minister unequivocally condemn these growing acts of violence which are creating a further divide in the fault lines that exist? Does PM Modi believe that his silence will reap political benefits for the BJP?” asked Mr Tiwari. The Congress spokesperson also asked when is the Home Minister Rajnah Singh going to seek report from the states on the growing incidents of hate crimes and mob violence.