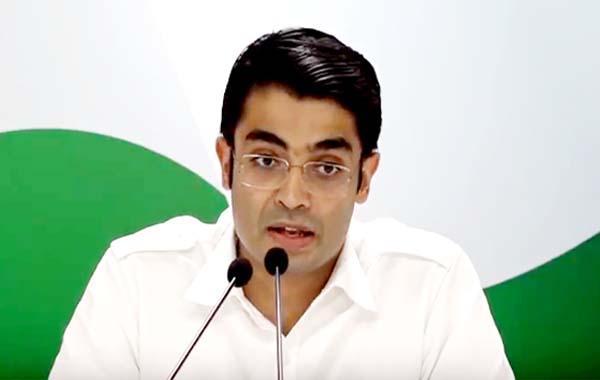 New Delhi, Accusing Prime Minister Narendra Modi of discriminating against Kerala and meeting out unfair treatment to the state, the Congress on Monday reiterated its demand for declaring the floods there as a national calamity. Talking to reporters here, AICC spokesperson Jaiveer Shergill said,’’the Prime Minister is doing politics on Kerala floods. Only Rs 500 cr was given to the state for flood relief which is ‘insufficient’. Initially when the demand was Rs 1200 cr, only Rs 100 cr was given and when the interim demand is Rs 2000 cr, Rs 500 cr has been given. The PM should show the same large heartedness in spending on Kerala flood relief as he shows in spending on self promotion and publicity. If the PM spends Rs 5000 cr on self publicity. Rs 2000 cr on foreign travel and Rs 1100 cr on the construction of the new BJP Headquarters then why is he spending only Rs 500 cr for flood relief in Kerala. If the PM is spending the tax payer’s money on self promotion then the tax payer is asking why this money is not reaching Kerala.’’ Describing the relief given to Kerala as a classic case of ‘too little too late’, Mr Shergill said,’’a state which is witnessing disaster of over Rs 19000 cr is getting a paltry sum of Rs 500 cr. If you compare the relief given to that spent in BJP ruled state of Gujarat and Assam where the damage was far less, then it is clear that the PM is giving unfair treatment to Kerala. The Congress, on behalf of the citizens of the country, asks whether the PM would have given only Rs 500 cr if there were elections in Kerala or if there was BJP rule in Kerala.’’ Mr Shergill said, the way the PM was discriminating against Kerala showed that he did not believe in the spirit of cooperative federalism. ‘’By mistreating Kerala, the PM has once again shown that he does not believe in the spirit of team India and cooperative federalism. Everyone in the Nation- civilian population and Chief ministers of all states - have contributed their bit for the Kerala relief except the PM who is busy playing petty politics,’’he said. Reiterating the party’s demand that Kerala floods be declared a national calamity, he said, ’’why has the PM not declared Kerala floods as a national calamity. It is because if the floods are declared National calamity, the Central government will have to spend money for the state. If they declare it a National calamity, it will have to set up a national calamity relief fund thus effecting the National treasury which he (PM) wants to later spend on self promotion. The PM should explain why a flood which claimed over 300 lives and affected 3.5 lakh people does not warrant being called a National disaster then what is.’’