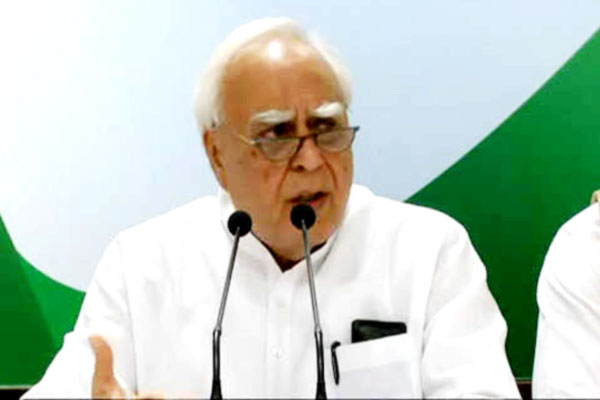 New Delhi, Describing the order by Rajya Sabha Chairman M Venkaiah Naidu to reject the notice for impeachment of Chief Justice of India Dipak Misra as "unprecedented, illegal, and hasty', the Congress on Monday said it will file a petition in the Supreme Court against the decision. Addressing a joint press conference with noted lawyer K T S Tulsi and head of the AICC legal cell Vivek Tankha, senior Congress leader and former Law minister Kapil Sibal said Mr Naidu was not the authority to decide merit of the motion. 'The order is unprecedented, illegal, ill-advised and hasty. I do not think momentous matters like these should be disposed of in such a fashion. It is our privilege to move the motion. You cannot boot our privilege. We'll certainly file a petition (in Supreme Court) against this. We would want the Chief Justice of India to not take any decision with respect to it, be it the listing or anything else. We will accept whatever the court decides,' Mr Sibal said. He said that Mr Naidu was not the authority to decide on the merit of the Motion.'He (Venkaiah Naidu) should have consulted the collegium. Not for him to decide merit,' Mr Sibal said."This unprecedented order only shatters the confidence of people, destroys the legitimate process of law. It seeks to ensure that no inquiry takes place," Mr Sibal said. Earlier, AICC media incharge Randeep Surjewala said the chairman of the upper House 'has no mandate to decide its merits'.In a series of tweets, after the Rajya Sabha chairman rejected the motion for lack of merit, AICC media in charge Randeep Surjewala said, 'Constitutional process of impeachment is set in motion with 50 MPs giving the motion.RS Chairman can’t adjudge the motion, for he has no mandate to decide the merits of the motion.' 'RS Chairman can’t decide on merits in absence of quasi judicial or administrative power (M Krishna Swami’s case). If all charges were to be proved before inquiry as RS Chairman suggests, Constitution & Judges (Inquiry) Act will have no relevance.Don’t muzzle Constitution,' Mr Surjewala said in another tweet. Calling it a 'fight between forces ‘Rejecting Democracy’ & voices ‘Rescuing Democracy’', he said, 'Within hours of 64 MPs submitting the impeachment motion,Leader of Rajya Sabha (FM) had expressed naked prejudice by calling it a ‘revenge petition’ virtually dictating the verdict to Rajya Sabha Chairman on that day. Has ‘Revenge Petition’ now become ‘Rescue Order’?' The Rajya Sabha chairman on Monday rejected the notice for impeachment of the Chief Justice of India, given to him by the Opposition on Friday, on grounds of lack of merit. Seven opposition parties had on Friday, given to the Rajya Sabha chairman a notice for impeachment of the Chief Justice of India signed by as many as 64 Parliamentarians (MPs).They include MPs from the Congress, the NCP, CPM, the CPI, the SP, the BSP and the Muslim League. Article 124(4) of the Constitution lays down the procedure for removal of a judge of the Supreme Court, including the CJI, who can be impeached on grounds of "misbehaviour or incapacity". A removal motion signed by 100 members of Lok Sabha or 50 members of Rajya Sabha has to be submitted to the Speaker of the Lower House or Chairperson (that is Vice President) of the Upper House. This can be in either of the Houses of Parliament. The Speaker/Chairperson can then either accept or reject the motion.