Cong to strengthen party at grassroots in MP: Babaria 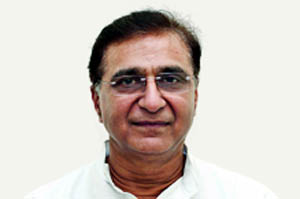 Chronicle Reporter, Bhopal In order to strengthen the party at grassroots in Madhya Pradesh with an eye on upcoming assembly elections, the Congress is planning to organise 2,000-2,200 meetings in small towns. “A blueprint prepared after an elaborate discussion over the past one month has been provided for the campaign. A 60-member team of senior Congress workers would implement the plan in the next one-and-half months,” said Congress’ Madhya Pradesh In-Charge General Secretary Deepak Babaria. He was interacting with media after holding a meeting of district presidents,legislators, executive members and senior party leaders organised at the state Congress office here. State party president Arun Yadav and Leader of Opposition Ajay Singh were also present at the closed door meet. “There will be an approximate 15 to 18 meetings of workers to be held at every assembly constituency which will work out of a total 2000 to 2200 conventions in one month. The intention is to give a momentum to the crusade before the assembly elections and update our workers on the issues we will raise,” he said. Proposals passed over certain burning issues State Congress President Arun Yadav said that the meeting passed a proposal for constituting mandalam, sector and booth committees under a block. This would help party bolster the party at the booth level. “Besides, a proposal was passed for constituting new blocks. Proposals were also passed over certain burning issues such as atrocities against peasants and their suicides and insult of Valmiki Samaj by Women and Child Development Minister Archna Chitnis,” he said. “A communal atmosphere is prevailing across the country. The BJP has adopted fascist policies. Democracy is in danger with regards to which Supreme Court judges expressed their concern. Suspicion surrounds Justice BH Loya death. The whole country has come to realise this,” said Babaria. “Similar circumstances are prevailing in BJP-ruled Madhya Pradesh. Senior BJP leader Uma Bharti got clean chit in the Professional Examination Board scam. Besides, incidents of crime against women are on the rise. Corruption has sunk deep into the system. The condition of farmers is pathetic,” he added. Congress leaders said that the entire time-table and routine has been chalked out so that the election motion can start by March. It was also evident that the party in Opposition in the state since December 2003 will make farmers’ and agrarian crisis a major issue before the elections. “Today we passed a resolution on farmers’ suicides at the meeting,” said PCC president Arun Yadav.

With less than a year to go for assembly elections in Madhya Pradesh, the million-dollar question in political circles these days is whether the Congress would project a chief ministerial candidate as its face – and if yes, who would be that face. Nonetheless, the Congress has described the question as a game-plan of the ruling Bharatiya Janata Party (BJP). “The BJP is deliberately trying to create a controversy by throwing up the question again and again,” Congress’ Madhya Pradesh In-Charge General Secretary Deepak Babaria told media here. He said that the question remained the internal matter of a political party, which reserved the right to declare or not a chief ministerial candidate or choose the appropriate time for doing so. Former Union ministers Jyotiraditya Scindia and Kamal Nath are being looked upon as strong contenders for the post of chief ministerial candidate. Recently, the name of state Congress chief Arun Yadav has also been thrown into discussion as he belongs to backward class. Leader of the Opposition Ajay Singh is also considered as a contender. A section of the party wants that the chief minister should be decided by the Congress Legislature Party after elections. The Congress has been languishing out of power in the state since 2003. In reply to a query, Babaria said that Congress President Rahul Gandhi advocated decentralisation of power. He is supporter of the idea that local issues should be resolved at local level.