Congress has no right to insult people of South India: BJP 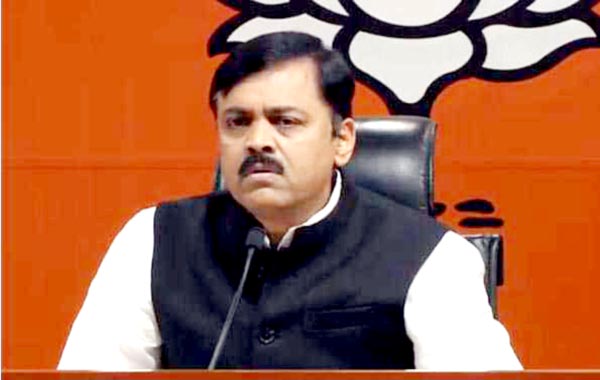 New Delhi, Condemning the principal Opposition party Congress for allegedly playing 'divisive politics', Bharatiya Janata Party's national spokesperson GVL Narasimha Rao said on Monday that they may have 'a lot of love and affection for Pakistan', but they have no right to insult the people of South India. 'We have no objection to the Congress if it has a lot of affection for Pakistan but they have no right to insult the people of the South India,' Mr Rao said while addressing a press conference at party headquarters here. Congress leader and Punjab Minister Navjot Singh Sidhu last week drew an analogy between visiting Pakistan versus south India and implied that Pakistan culture was more similar and familiar to Punjab than south India.Break India is the new slogan for the Congress Party, Mr Rao said. Alleging that Congress president Rahul Gandhi cannot do any thing positive for the party, Mr Rao said Congress leaders tried to create unrest in the peaceful state of Gujarat and people of Bihar and Uttar Praesh were forced to exit the state. 'You may like Karachi kulcha but you have no business to hurt the sentiments of people in South India,' he said.Negative perceptions were being created by making such insensitive and insulting comments, he said.He said Late Prime Minister PV Narasimha Rao who was 'the wisest man in the party' was 'insulted' by his own party. The BJP leader said the late prime minister's body was not allowed to be brought in Congress headquarters by Congress leader Sonia Gandhi although Dr Manmohan Singh was willing.'Sonia has an anti-South India mindset,' he said, adding that there was no memorial for the 'real father of India's economic reforms' in Delhi. In the context of Congress leader Shashi Tharoor comment on Ram temple construction in Ayodhya, Mr Rao said Congress was using all sources and leaders to built momentum against construction of Ram temple in Ayodhya. While a vast majority of Hindus believes that Ayodhya was the birthplace of Lord Ram, no good Hindu would want to see a Ram temple built “by demolishing somebody else’s place of worship,” Mr Tharoor has said on Sunday. 'We want an early resolution on the vexed issue and are waiting for the court verdict,' he said.He asked,' 'Shiv bhakt Rahul' to tell whether he is a Hindu or not. A devotee or not.' He accused Mr Tharoor of muddying the waters on the issue and accused the Congress of indulging in vote bank politics when when the court was seized of the issue. On the Income Tax raids being conducted in the country, including at the residence of TDP MP CM Ramesh and a TRS MP in Telangana and many other companies facing tax evasion, Mr Rao that it was a routine process.'Being in politics does not give anybody any legitimacy or immunity,' he said. People who were searched were businessmen but were in politics. Agencies like Enforcement Directorate and Income Tax Department were doing their jobs, he said. 'Searches against contractors, business were being done for money laundering and tax evasions, but to give this political colour would be to avoid accountability,' he said, adding that 'TDP was crying unnecessarily' on the issue. The Andhra Pradesh government refused to give details to even the CAG when crores were siphoned off, he alleged.