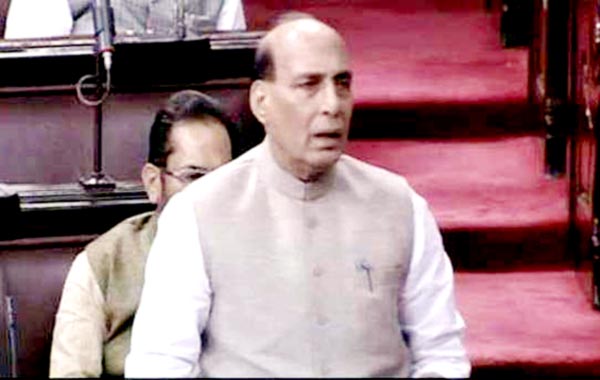 New Delhi, Notwithstanding strong political differences between Congress and BJP,Lok Sabha lawmakers from these two parties on Friday seemed to agree that there was 'peace' in Assam after the publication of the draft NRC and lamented that 'sub regionalism' was being created by vested political parties. During the high voltage discussion during Zero Hour in the House over the detention of Trinamool Congress delegation, including MPs in Silchar airport on Thursday, the Congress member from West Bengal Adhir Ranjan Chowdhury asserted that there is "no civil war and blood bath in Assam or Bengal". Without naming Trinamool, the Baharampur MP, also known for his strong anti-Trinamool stance, said - "sub regionalism was being created" over the NRC issue. In fact, Mr Chowdhury's remarks came shortly after BJP MP from Guwahati, Bijoya Chakravarty questioned the rationale behind the visit of Trinamool delegation as the state is very much peaceful and no untoward incident has been reported from any of the 37 districts. "West Bengal Chief Minister (Mamata Banerjee) has said there will be civil war and blood bath in Assam....for a Chief Minister to say such a thing is 'bhayanak (has dangerous ramification)'," she said amid strong protest from the Trinamool members. "What is Trinamool leadership trying to do when things are peaceful in Assam," said Ms Chakravarty, adding the issue in Assam is not linguistic conflict between Assamese and Bengalis. "It is a national issue....Even in my constituency Guwahati there are 3.45 lakh Bengalis," said former Union Minister. Another Congress MP Gaurav Gogoi also sounded critical of Trinamool MP Kalyan Banerjee and said the sensitive issue in Assam cannot be resolved or handled through "high vocal speech". He said it is high time everyone contributed to end politics of hatred and fear.Mr Gogoi claimed contrary to BJP's claims that the saffron party regime in the state deserves all the credit for NRC exercise, it was the Congress government which had completed 90 per cent of the work. But he said, "there has been mistakes in printing of names and this should be corrected". Independent MP from Kokrajhar Naba Kumar Sarania also made a strong pitch for NRC and said people of Assam want peace. He also said whatever lapses or grievances are there now with the draft NRC, these can be always redressed at a later stage. During the discussion, making a brief intervention Home Minister Rajnath Singh confirmed that members of a delegation from Trinamool Congress were detained in Silchar airport on Thursday afternoon to maintain "law and order and prevent things from escalating". Earlier, Trinamool MP Kalyan Banerjee said the team had gone to Silchar in Barak Valley of Assan to make on the spot assessment of the situation arising from the publication of draft National Register of Citizens. Mr Banerjee said Kakoli Ghosh Dastidar, Mamata Thakur, Arpita Ghosh and Ratna De Nag - all Lok Sabha MPs and two members of Rajya Sabha Sukhendu Sekhar Roy and Md Nadimul Haque were detained. He alleged their 'detention' was matter of privilege. "We depreciate the conduct of the Assam police," Mr Banerjee alleged and maintained there was "undeclared emergency" in the country under the BJP rule. Just as BJP members raised objection to his remarks, the Serampore MP taunted the treasury bench saying - "Elections are coming....are you nervous". Since July 30 when the second draft list of NRC was published the Trinamool Congress intensified their battle against BJP regimes both in Assam and in the centre saying the NRC exercise was being carried out in a malafide manner and genuine citizens were being targeted.