Congress to bring back those who left the party 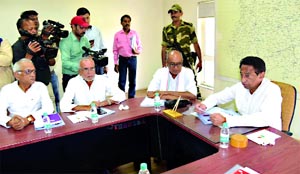 Coordination committee given the job to mobilise worker and leaders, says Nath

Chronicle Reporter, Bhopal Madhya Pradesh unit head of Congress, Kamal Nath, has stressed the need to bring back party men who left the party or were suspended or sacked due to some reason. He said such party men should hold talks with members of our coordination committee and return to the party fold with honour. Addressing the first meeting of the committee, Kamal Nath said communication with influential persons, who are not active and those who have been expelled from the party, need to be restored. State president said party leaders, who are disliked by a person due to factionalism in districts, should also be assigned work. Mahesh Joshi said the committee, during the Yatra, would also minutely check the winnability of a candidate. PCC chief Kamal Nath explained that Digvijaya Singh and the coordination committee has been given the job to mobilise the Congress worker and leaders force. Some of our influential leaders and effective workers are sitting at home. Some have been threatened, some were expelled and others who resigned. There are also those who are of Congress ideology but are not members of the party, Kamal Nath said. The party has to bring all these workers back into the party and distribute electoral responsibilities to them. Our intention is to unite everyone, he added. Nath said the party was open to forging an alliance with like-minded parties for the upcoming assembly election in the state at the end of this year. Nath said that talks with these parties have not yet started. It is yet to be decided whether it should be a seat sharing agreement, understanding on candidates and other such details, he told. Explaining the logic behind considering an anti-BJP coalition, he said that in the 2014 election, BJP had received 31 per cent of the votes polled and 69 per cent of the votes were against him. “Despite this, the BJP claims the public mandate was with them. We do not want the secular vote to be divided, so we will start discussions with parties soon, he said. The veteran Congress leader’s statement comes just a day after several opposition leaders attended the swearing-in ceremony of Karnataka CM HD Kumaraswamy in a massive show of unity. Nath said that the situation on the national level and at the state level was different, but alliances will have to be made keeping in mind the target of 2019 elections. Nath told journalist that he would initiate talks with other parties to explore alliance in the state on the basis of seats and candidates. He said he has not started talks so far with any party. He said possibilities of alliance. He said we have to win elections this time and there is no quota of tickets. Former MP Rameshwar Neekhra, speaking in the meeting of coordination committee, said he had got feedback that Congress workers do not reach out in public. Neekhra told committee to urge Congress workers to go in public.

Kamal Nath said party leader Meenakshi Natrajan is not annoyed. He said he himself had talked with her. He told reporters that Meenakshi Natrajan had not given her resignation. Earlier there were reports that barely a fortnight before AICC president Rahul Gandhi’s scheduled rally in Mandsaur, fissures had appeared in the state Congress, with former Mandsaur MP Meenakshi Natarajan resigning from the party manifesto committee. The row seems to be over the appointment of Rajendra Singh Gautam, who once contested against Natarajan, as a state party coordination committee member. As many as eight close aides of Natarajan have resigned in protest against Gautam’s appointment, said sources. Sources said Natarajan, known to be close to Rahul, sent her resignation to AICC general secretary in-charge of state affairs, Deepak Babaria, on Tuesday night, just hours after the new appointments to party committees were announced. PCC officials did not confirm the resignation. But state Congress media committee chairman Manak Agarwal said we have asked Meenakshi Natarajan to come to the party forum and discuss her grievances, if she has any. Natarajan said she would discuss such issues in the party forum. PCC chief Kamal Nath and Digvijaya Singh called a meeting of the coordination committee on Thursday morning to try and resolve the controversy.