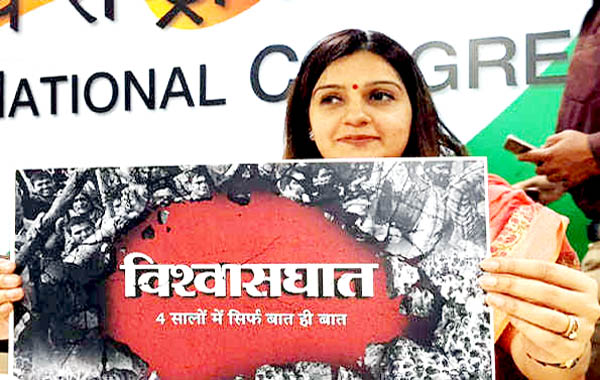 New Delhi, As the Modi Government at the Centre completes four years of its rule on May 26, the Congress will observe the day as 'betrayal day' and organise press conferences, dharnas and protests across the country to highlight the misgovernance of the Government on all fronts and its failure to fulfil the promises made to various sections of society during the 2014 Lok Sabha elections. Addressing a press conference here, AICC general secretary Ashok Gehlot, AICC media incharge Randeep Surjewala and AICC spokesperson Priyanka Chaturvedi said the Congress will observe 'Vishwaghat Diwas' on May 26. As part of this, the Congress leaders will carry out pan India press conferences to expose the misgovernance of the BJP-led Government at the Centre and the betrayal of the faith that the people had vested in the BJP in the 2014 Lok Sabha elections. Speaking on the occasion, Mr Gehlot said, 'when the BJP came to power in 2014, the people of the country had a lot of expectations from the Government led by Prime Minister Narendra Modi. Considering that it was the first Government, after the Congress government led by Mr Rajiv Gandhi, that had got an absolute manjority in the Lok Sabha, people had a lot of hopes from it. However, in the past four years of its rule, this Government has betrayed the expectations that the people had vested in it. In fact, this Government has crossed the limits of betrayal. Now, with just one year left for the 2019 Lok Sabha elections, all hopes of arrival of 'acche din' have faded. Hence, on the occasion of the fourth anniversary of this Government, all the MPs, MLAs, the PCC chief, the CLP leaders and the DCC chiefs will carry out protests against the government to make the people believe that Congress is standing with them in these trying times. '