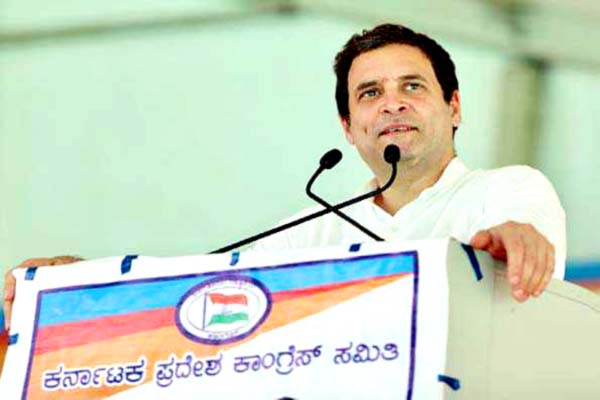 Chamarajanagar, AICC President Rahul Gandhi on Saturday asserted that his party will not allow the BJP led NDA government at the Centre to change the constitution to suit their needs. 'They (the BJP) has started a new fashion of attacking the Constitution. Dr B R Ambedkar fought for the Constitution and they want to change it. We warn them we will not allow this. No matter how much they try, we will not let them change it' he said while addressing Janaadesha rally here ahead of the Assembly elections due in May in Karnataka. Continuing his tirade against the BJP for not waiving the farm loans, he said 'BJP stole your money and gave it to the rich and they write off Rs 2.5 lakh crore of loan provided to capitalists. He said Prime Minister Narendra Modi comes to Karnataka and talks about corruption even as former Chief Minister B S Yeddyurappa and four of his former colleagues who went to jail on corruption charges, share the dias with him'. Referring to the promises made by the BJP ahead of the last Lok Sabha election such as eradication of Black Money and employment to two crore youth he said ' the word should not be empty or untrue and must have some weight and you must stick to it'. He pointed out that during his dialogue with students of the Maharani women's college in Mysore, students asked him why Mr Modi had lied when he said he would create two crore jobs every year and another student said demonetisation was a disaster. On the contrary he said, the Congress government led by Mr Siddaramaiah in Karnataka has fulfilled the promises made to the people and if voted back to power in the next Assembly election it would double its achievements. 'We will take everyone along and move forward', he added. Mr Gandhi told the Congress workers that they were the party's backbone and they would be respected and get a role in the government. Those who fight for the Party ideology would be protected, the Congress President said.