Conservation of river must for development: CM 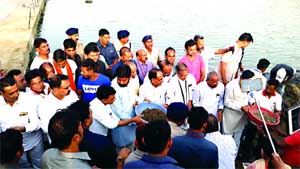 Chronicle Reporter, Bhopal, Chief Minister Shivraj Singh Chouhan today reached the Shivna riverside near Pashupatinath temple in Mandsaur and offered shramdan along with the public for conservation of the river. The Chief Minister filled mud in a ‘tagadi’ with his own hands and put it in the tractor trolley. Looking at his dedication, other public representatives along with local residents also offered shramdan for conservation of the river. This campaign is being run by the Jan-Abhiyan Parishad. Chouhan lauded the efforts of the residents of Mandsaur for deepening, beautification and conservation of the river. He said that the conservation of rivers is very essential for development. This work should be undertaken in the form of a movement. Chouhan called upon the citizens for support in the river conservation campaign. He said the state government will extend expected support in deepening and beautifying the river. MP Sudhir Gupta, MLA Yashpal Singh Sisodia, Jagdish Devda, Dilip Singh Parihar, Chander Singh Sisodia, other public representatives and senior administrative officials also offered shramdan.