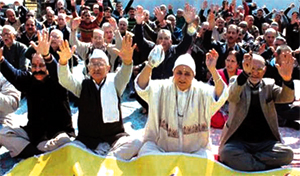 Agencies, Jammu Displaced persons from erstwhile parts of Jammu and Kashmir (PoK) on Friday said they will not tolerate any attempt to distort their historical heritage. ‘Under a well-knit conspiracy, a plot is being created to spoil the case of PoK DPs. A handful of Kashmiri migrants in a form of delegation recently approached the Government for the reopening of Sharda Peeth (Temple) in Muzaffarabad. It was immediately recommended by the BJP Minister to Home Ministry for consideration,” PoK displaced persons from Poonch, Mirpur, Muzaffarabad, Bhimber and Kotli, told a joint news conference here. They said there were various religious places in PoK, including Nageshwer Maha Dev located in the village Graha, where there was a holy spring and every year,it was the site of a Baisakhi Mela. Devi Gali and Plangi Devi were other important Hindu shrines apart from the Dera of Sant Bhai Rocha Singh, a Sikh shrine of Rawalakote, Chhati Patshahi at Niluchi in Muzaffarabad, Gurudwara Ali Begh in Bhimber, Khoiratta in Kotli, Mangla Temple in Mirpur and Sharda Temple in Muzaffarabad and they have been demanding to visit these religious places for the past seven decades. ‘We have made our representations before various successive Governments but none acted upon our demands,’ the old timers said, adding that they had knocked the doors of every political party but in vain. ‘As is a known fact, Sharda Peeth does not belong to only one community as the goddess is worshipped by all the Hindus of Jammu and Kashmir and rest of the country,” they said, adding that Kashmiri Pandits had nothing to do with Sharda Peeth as this issue was being distorted deliberately to derail the cause of PoK DPs. “In 1994, Parliament had passed a resolution that the state of Jammu and Kashmir has been, is and shall be an integral part of India and any attempts to separate it from the rest of the country will be resisted by all necessary means; Pakistan must vacate the areas of the Indian State of Jammu and Kashmir, which they have occupied through aggression,” they said, adding that the people who were forcefully thrown from these places will be rehabilitated there. “It has been more than seven decades and we have been waiting when PoK will be taken back,” they said and added that their properties are still lying there. ‘We have been living in inhuman conditions in filthy camps for the past 70 years and have not got relief from Government like Kashmiri Pandits who are getting monthly cash compensation of Rs 10,000, free ration, free accommodation, reservation in Government jobs, reservation in technical and professional colleges across the country and much more. “Why is Government adopting the discriminatory approach between KPs from Valley and DPs from PoK?” they asked.