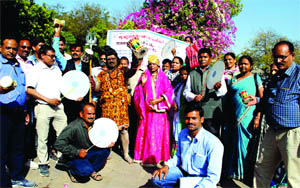 Chronicle Reporter, Bhopal District and police authorities were in a tizzy for about an hour after an agitating guest teacher climbed a water tank, tried a noose around his neck and threatened to commit suicide. The incident occurred on the third consecutive day of a strike by guest teachers in support of their demands including their regularisation at the Ambedkar Ground here. Shambhu Charan Dubey got on to the tank at around 1315 hrs. Superintendent of Police (Bhopal South) Rahul Lodha, Additional District Magistrate GP Mali, Addtl SPs Dharmaveer Singh Yadav and Sameer Yadav reached the protest site. Fire brigade was also deployed on the spot. Dubey climbed down from the tank after about an hour after he was pacified by authorities. The School Education Department has clarified that the academic session in government schools will begin from April 01, in the current year. Keeping in view the same, the arrangement for guest teachers will be made against the vacant posts in the schools after April, 01. The department further clarified that the time period of the guest teachers has been fixed as February 28 due to the change in the period of academic session. Necessary directives have been issued by the department to the Commissioner Public Instructions, Director State Education Center, Collectors and Chief Executive Officer of Jila Panchayat in this connection. The department has informed that arrangement of guest teachers is made temporarily against the vacant posts and during the vacation and training of teachers. Earlier, contract health workers joined agitating teachers and organized a protest at JP Hospital. Anger of the workers could be gauged from the fact that they drew their own blood and wrote ‘Hamari Bhool Kamal ka Phool’ and resorted to sloganeering.They said that their protest would continue till their demands are not met that includes regularization of their jobs. The contract health workers were joined with guest teachers, aganwadi workers, Asha workers, Kotwars, Usha workers and several others under banner of Sarv Karmchari Gathbandhan. More than 70,000 contract workers belonging to various categories gathered at local Ambedkar ground on Monday. The workers also lodged protest and objected to the statement given by health minister Rustam Singh. The agitating health workers also protested in other parts of the state. Large numbers of contract workers are staging protest at the ground including guest teachers in large numbers. Police personnel have been posted there in large numbers considering the presence of huge number of contract workers present there from across the state.