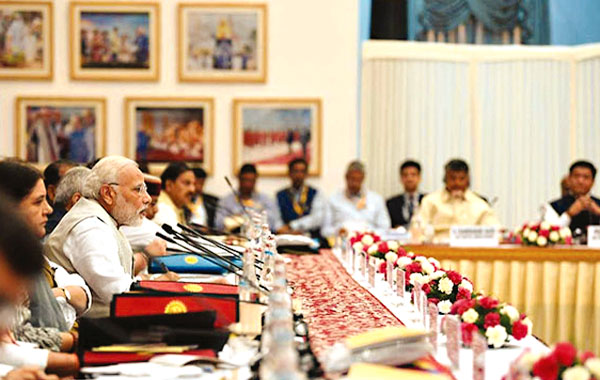 Agencies, New Delhi, Seeking to reach out to the states, Prime Minister Narendra Modi on Sunday said that “cooperative and competitive federalism holds key to progress”. Delivering the opening remarks at the fourth meeting of the Governing Council of NITI Aayog, in Rashtrapati Bhawan Cultural Centre , the Prime Minister said the Governing Council has approached complex issues of governance as “Team India”, in the spirit of cooperative, competitive federalism. He described the smooth rollout and implementation of GST as a prime example of this.Welcoming the Chief Ministers and other delegates, the Prime Minister reiterated that the Governing Council is a platform that can bring about a “historic change’. He assured the Chief Ministers from flood-affected States that the Union Government would provide all assistance to them, to deal with the flood situation currently affecting parts of the country. The Prime Minister said that Chief Ministers of States had played a key role in policy formulation, through sub-groups and committees on issues such as Swachh Bharat Mission, Digital Transactions, and Skill Development. The recommendations of these sub-groups have been incorporated by various Ministries of the Union Government, he added. The Prime Minister said that the Indian economy has grown at a healthy rate of 7.7 per cent in the fourth quarter of 2017-18.He added that the challenge now is to take this growth rate to double digits, for which many more important steps have to be taken.He said that the vision of a New India by 2022, is now a resolve of the people of our country. In this context, he mentioned the issues on the agenda today, including doubling of farmers income, development of aspirational districts, Ayushman Bharat, Mission Indradhanush, Nutrition Mission and celebrations of the 150th birth anniversary of Mahatma Gandhi. The Prime Minister said that 1.5 lakh Health and Wellness Centres are being constructed under Ayushman Bharat. He said about 10 crore families will be provided health assurance worth Rs 5 lakh every year. He said a comprehensive approach is being adopted for education, under the Samagra Shiksha Abhiyan. The Prime Minister said that schemes such as Mudra Yojana, Jan Dhan Yojana and Stand Up India, are helping in greater financial inclusion. He emphasised the need for tackling economic imbalances on priority. He said that all aspects and parameters of human development need to be addressed and improved upon in the 115 aspirational districts. Mr Narendra Modi said that the Gram Swaraj Abhiyan has emerged as a new model for implementation of schemes. He said that this has so far been extended to 45,000 villages in the Aspirational Districts.He said that the target is universal coverage in seven important welfare schemes: Ujjwala, Saubhagya, Ujala, Jan Dhan, Jeevan Jyoti Yojana, Suraksha Bima Yojana, and Mission Indradhanush. He said this target was recently accomplished in about 17,000 villages.