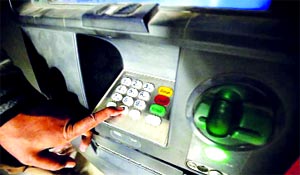 Chronicle Reporter, Bhopal A cop was duped by a fraudster who replaced his ATM card with fake one in ATM booth and later used the original card to transfer money in a bank account.A police assistant sub inspector (ASI) was duped to the tune of Rs 81000 as a fraudster transferred the money to a bank account using the victim’s ATM card. The victim Ramswaroop Gurjar is an ASI with Bajaria police station. According to Ashoka Garden police station in-charge Manoj Dixit, ASI Gurjar went to an ATM at Parikrama Marg under Ashoka Garden police station on Friday evening. However, he experienced some difficulty in conducting the transaction. A youth who was in his twenties offered to help him. Gurjar gave the ATM card to the youth and also told him the pin details. The youth conducted the transaction on behalf of Gurjar after which he returned the ATM card to Gurjar. Shortly afterwards Gurjar received a message on his mobile about a transaction of Rs 81000. A shocked Gurjar rushed to the ATM kiosk but the youth had already left. The victim discovered that the youth had given him some other ATM card and kept the original card with him. The youth had used the original card to transfer the amount into some other account in Tamil Nadu. TI Dixit said the CCTV footages at the ATM kiosk are being checked to identify the accused youth. He said another policeman in Dhar district was duped in the similar fashion. The TI, however, ruled out any connection between the two incidents.

Farmer duped in name of loan

Six people, including a girl, have approached Baghsewania police station with the complaint that they have been duped in the name of providing job to them. The victim girl Ritu Bairagi, 27, resident of Danish Nagar, in her complaint started that the accused Anuj Sharma ran a company in Malviya Nagar area. In September 2017 he called 10 people for interview. The selected candidates were asked to fill a security bond of Rs 5000 each on a stamp paper of Rs 100. The accused later shifted his office to MP Nagar and did not call the candidates for the job. Victim Ritu and five other candidates who had been cheated by Anuj Sharma lodged a complaint against him at the police station on Friday.

Body of a girl was found inside a well in Indrapura village. Berasia police have registered a case in this regard.Police were informed by locals after spotting the body and on the receipt of the information a police team rushed to the spot and body was pulled out. In the initial investigation the deceased was identified as Puli Gurjar of Indrapura village was missing for the past 10 days. Police said that the deceased went missing on January 29. The family after failing to trace the girl lodged a missing complaint with the Berasia police. Later, her body was found inside a well late in the afternoon on Wednesday. During the investigation police investigated call record details of the deceased and found that the deceased had talked last with Kuber Singh Gurjar in Indrapura village.Kuber told the police that he was in contact with the girl but expressed ignorance over the death of the girl. The post mortem report is awaited which could reveal that the deceased committed suicide or she was killed. The deceased was sexually assaulted or not would be investigated. The deceased was acquainted with Kuber who works as a driver and used to come to her village during road construction work. The family members have told the police that the deceased left the house after verbal spat with her mother and before leaving she said that she would end her life.After the preliminary investigation the body was sent for the post mortem and a case under section 174 of the CrPC was registered and police had started further investigation.