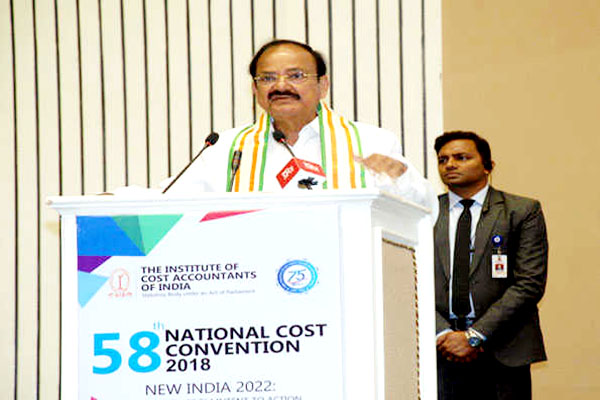 New Delhi, Vice President M Venkaiah Naidu on Friday urged professional bodies like Cost Accountants to be in the forefront in the fight against fraud and corruption, saying that in recent scams the role of a few chartered accountants had brought bad name to the profession. 'You have the onerous responsibility to examine proposals and assess the costs and assist the decision-makers to take informed decisions. Your professional expertise must constantly be enhanced by learning from the best practices within and outside India' he said addressing the inaugural session of the 58th National Cost Convention of Institute of Cost Accountants of India here. He noted that they could help in bringing in 'greater transparency, ethical corporate behaviour and enhanced accountability into our corporate governance system,' an official release here said. The Vice President called on CMA professionals to expedite FDI by effective valuation of assets, liabilities, stocks, properties to facilitate investors to make the right financial decisions and fulfill regulatory obligations. 'Introduction of Goods and Services Tax and the inclusion of anti-profiteering clause in the Act, made it mandatory to pass on the benefit of tax reduction or input tax credit to the final customer', he added. India, he said, was currently reviewing and simplifying laws and procedures and the ease of doing business index had become a popular tool for governments to show that they offered a favorable investment climate for private businessmen. By 2022, which would be the 75th anniversary of India's Independence, the country was aiming at food security as one of India’s top policy priorities and doubling of farmers’ real income as the need of the hour. Turning to development, Mr Naidu said it was meaningless unless it incorporated the needs of the farming sector as no true development could be meaningful unless it incorporated the needs of the farming sector. The Vice President suggested six possible drivers of income for farmers’ growth, as sincere implementation of such measures would double farmers’ income by 2022. These were diversification of farm activities towards high-value crops and enterprises; improving irrigation facilities to double productivity; better price realisation for farmers through competitive markets, value chains and improved linkage between field and fork among others. Minister of State for Law & Justice and Corporate Affairs P P Chaudhary and other dignitaries were present on the occasion.