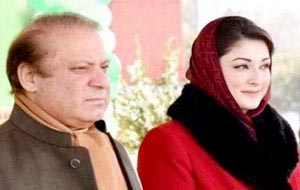 Islamabad, An accountability court on Thursday rejected ousted premier Nawaz Sharif and daughter Maryam Nawaz’s plea seeking a week-long exemption from appearing before it to visit ailing Kulsoom Nawaz in London. The court conceded with the National Accountability Bureau (NAB) argument that since the trial was at a concluding stage, hence the Sharif family should not be allowed to leave the country, an Express Tribune report said. Judge Mohammad Bashir had earlier reserved the verdict after hearing arguments from both the sides. The Sharif family members had sought an exemption from June 11 to June 16, and the petition submitted also had Kulsoom’s medical report attached. In the request, the ruling family informed the court that they will be travelling to the United Kingdom to make decisions regarding Kulsoom Nawaz’s treatment plan for cancer. The application states that despite six cycles of chemotherapy, there was a relapse.