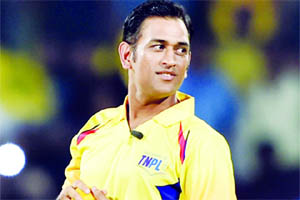 Agencies, Chennai Asserting that Chennai was his second home, Chennai Super Kings (CSK) Skipper Mahendra Singh Dhoni on Friday said that the franchise would try to get back local lad and off-spinner Ravichandran Ashwin back in the fold at the IPL players’ auction, scheduled for January 27 and 28 at Bengaluru. ‘’We will definite go for him and try to get him (Ashwin)’’, Dhoni told reporters at a promotional event organised by India Cements here. The CSK one of the most fancied teams was back in IPL after serving a two year ban following the spot fixing scandal in 2013. The CSK has retained Dhoni, Suresh Raina and Ravindra Jadeja. Stating that Ashwin was back in auction pool for CSK, Dhoni said “As I have said it is always a tough call.With Ashwin, you know we had done the same thing in the past.’’ ‘’We will definitely go for him in the auction. Ashwin is a local lad and we want a lot of local players to be part of CSK,” he said. “We have two right-to-match options.Having already retained three capped Indians, I don’t think we can use it. We will have to buy him out in the auction’’, he added. ‘’As of now, it is tough to say,” he said. Dhoni, however, said Ashwin would come first in the auction for CSK. ‘’But we will have to wait and watch. We will try to get him,” he added. Dhoni said several franchises approached him ahead of the Player Retention event earlier this month. ‘’There was no question of me playing for any other team other than yellow brigade (Chennai Super Kings). Chennai is my second home’’, he said. Dhoni also spoke about the love he has received from CSK fans through the years, while applauding the team management for weathering a tough phase during the last couple of years. ‘’The fans have over here have literally adopted me, they accept me as their own.There can’t be a bigger compliment than that. This is a special place and that thought of being with any other franchise was never a question’’, he added. To a question, Dhoni said the ‘’IPL controversy has not affected the brand image of the team. Yes, it did hurt when the team was suspended for two years’’. ‘’We are more like a family. Stay together through ups and downs,’ he said.