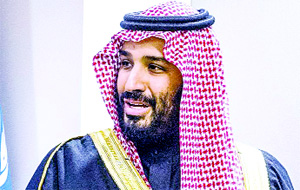 Agencies, Dubai War could break out in the Middle East in the next decade if Iran’s terror activities in the region are not curbed, said Saudi Crown Prince Mohammed bin Salman. In an interview to the Wall Street Journal, the Crown Prince, who is on a visit to the United States, said the international community should exert more economic and military pressure on the regime in Tehran to prevent it from becoming a larger threat to the region. He warned that a direct confrontation between Riyadh and Tehran looms in the next 10-15 years if Iran’s terror networks and proxies like Hezbollah and the Houthis continue to sow discord in the Middle East through sectarianism. Iran signed a nuclear deal with the West, Russia and China three years ago in exchange for the lifting of economic sanctions. This has enabled Tehran to actively pursue its missile development programme. “Sanctions will create more pressure on the regime,” said Prince Mohammed in the interview. US President Donald Trump, however, has been an opponent of the Iran nuclear agreement known as the Joint Comprehensive Plan of Action (JCPOA). He has called it the “worst ever” and has indicated that Washington will quit the pact in May, while Britain, France, Russia and China maintain that it is the best deal possible. Iran has supplied the Houthi militia in Yemen with weapons used against Saudi Arabia over the past three years, the Crown Prince told the WSJ. The group fired several ballistic missiles into the Kingdom this week which were shot down by defence systems. The Crown Prince stated that these attacks were “evidence of weakness”. The Crown Prince defended the Arab coalition’s intervention in Yemen, and said: “Yemen was about to get split between the Houthis and Al Qaeda if we had not intervened in 2015. He said the Muslim Brotherhood is the root cause of terrorism in the Middle East and Arab countries would fight the scourge together. “We have to get rid of extremism. Without extremism no one can become a terrorist,” he said.