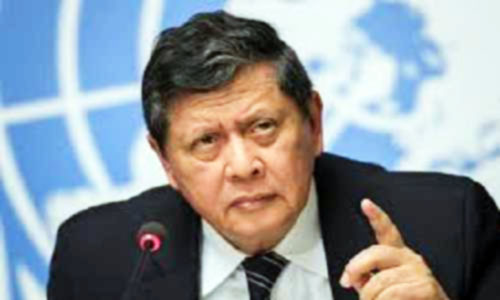 Geneva, UN Independent International Fact-Finding Mission on Myanmar (FFM) urged the international community on Tuesday to cut off all financial and other support to Myanmar's military as a counteractive measure to the country's unresolved Rohingya crisis. The Rohingya, a Muslim minority in Myanmar, have been fleeing their homes to avoid waves of violence following the government's deployment of police and military units in response to an attack by Rohingya insurgents on security posts in the country's western state of Rakhine on August 25, 2017. FFM Chairperson Marzuki Darusman said that the measures were necessary because Myanmar had not done enough to resolve the nation's conflict and protect human rights, including those of over one million Rohingya civilians in exile, reported Al Jazeera. "There has been no movement toward a resolution of the crisis. The situation is at a total standstill," Darusman said after a 10-day visit to Southeast Asia. According to the mission, the economic embargo on Myanmar's military would isolate its commanders and force them to come before a credible court to answer charges of war crimes. In September, FFM submitted a 444-page report to the UN Human Rights Council (UNHRC), documenting how Myanmar's military brutally and systematically violated the human rights of ethnic minorities throughout the country. The report focused on the military's "clearance operations" in 2017 against the Rohingya in Rakhine, when security forces killed and raped thousands of people. Myanmar's government denies the accusations.