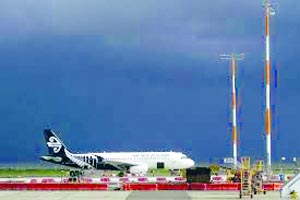 Agencies, New Zealand New Zealand’s national carrier on Tuesday cancelled all flights in and out of the capital, Wellington, and the southern city of Christchurch declared a state of emergency as the remnants of tropical cyclone Gita pummelled the country. Even before the storm hit in full force, heavy rains in the centre of New Zealand brought floods in Christchurch, prompting a warning from Mayor Lianne Dalziel.“The full impact of the storm will be felt overnight and tomorrow morning,” she said, urging residents of low-lying areas to evacuate. “We are expecting homes to be flooded.” Air New Zealand said all flights to the capital would be grounded from 2.45 p.m. (0145 GMT) as weather authorities issued warnings of severe weather and heavy rain and gusts of up to 150 kph (93 mph). Prime Minister Jacinda Ardern said troops had fanned out to areas likely to be the hardest hit and the national Civil Defence office in Wellington was on standby to help. “My message still to people is please look out for your local warnings and expect disruption to travel and please just be careful,” she told reporters at parliament. CycloneGita hit the Pacific island nations of Fiji and Tonga last week, packing winds up to 275 kph (171 mph). Fiji escaped major damage but Tonga suffered widespread destruction and flooding. Earlier, the storm had caused extensive damage in Samoa and American Samoa. The cyclone had since been downgraded to a storm, but forecasters said it was still likely to wreak havoc on Tuesday evening as it traversed the centre of New Zealand. Parts of the country are still reeling from a huge storm that prompted authorities to declare states of emergency at the beginning of February.More than 40 schools and preschools shut in the upper South Island, while mayors urged people to stay home. Transport authorities shut a stretch of highway along the east coast of the South Island and the Department of Conservation was closing seaside hiking tracks and campsites along the West Coast and ushering tourists away from low-lying areas, media said.