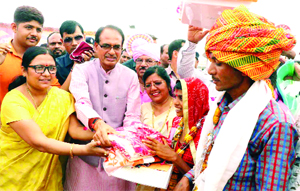 Chronicle Reporter, Bhopal0 Chief Minister Shivraj Singh Chouhan today wished 1254 newly wed couples a happy married life at a mass marriage/nikah ceremony organized in Kukshi city of Dhar district. This ceremony was organized under Madhya Pradesh government’s Mukhya Mantri Kanya Vivah/Nikah Yojana . As many as 1235 Hindu pairs tied the knot amidst chanting of Vedic mantras. Besides, 19 Muslim couples tied the knot in the presence of the Qazei Saheb following Muslim rituals. Additional fund of Rs 2 lakhs each was given to disabled couples at the ceremony. As per the state government’s scheme all essential household goods besides marriage certificates were presented to the newly-weds. Extending his best wishes to the newly-weds CM Chouhan said that all religions are looked upon with respect in Indian culture. Daughters are highly respected and worshipped in all religions and sections of the society. He said that there should not be any kind of discrimination between son and daughter in any of the sections. He said that ‘Beti hai to kal hai’ (daughters are our future), hence let them come into this world. Chouhan said that in order to prove that daughters are a boon to a family, Mukhya Mantri Kanyadan and Mukhya Mantri Ladli Laxmi schemes are being implemented in Madhya Pradesh. Girls are being given free books and cycles so that they can study and women are being given reservation in jobs. He said that the state government has ensured all arrangements to empower women. As a result women are successfully working on significant posts in panchayats and urban bodies also besides government services. Chouhan said that the state government has made adequate arrangements for the progress and security of girls and women of all sections. These arrangements have been made for women belonging to labourers’ families also. The Chief Minister lauded the police-administration for prompt action against those found guilty in a rape case sometime back in Dhamnod. He said that any kind of misbehavior with women will not be tolerated. Chouhan issued instructions to take strict action against anti-social elements. CM Chouhan presented marriage certificate and a symbolic cheque of additional assistance fund of Rs 2 lakh to newly-wed disabled couple Bheembai and Madhav Singh. He also announced construction works worth Rs 5 crore related to development of Kukshi city. District Minister in charge Antar Singh Arya, Member of Parliament Smt. Savitri Thakur, MLA Smt. Ranjana Baghel, Surendra Singh Baghel, Velsingh Bhuria, Kalu Singh Thakur, Nagar Palika Chairman Mukam Singh Kirade, other public representatives besides senior administrative and police officials were also present at the mass marriage ceremony.