Days after BJD backed NDA in RS, Javadekar says no democracy in Odisha 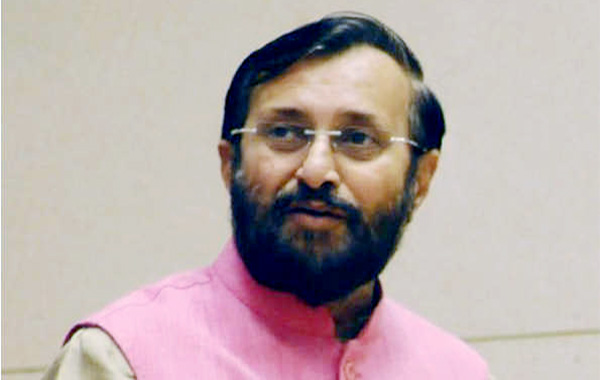 New Delhi, Days after Biju Janata Dal of Naveen Patnaik backed NDA candidate Harivash as the new deputy chairman in Rajya Sabha, the BJP leader and Union HRD Minister Prakash Javadekar on Tuesday alleged that "there is no democracy in Odisha". "There is no democracy in Odisha, only 'BJDcracy'. Bureaucracy is being used for political gains. Officers are under tremendous pressure," tweeted Mr Javadekar. In a series of tweets, the Union Minister blasted out at the Naveen Patnaik-led dispensation in the state that the it has not taken any action against "chit funds looters". "In fact, the chit fund looters are being protected by the BJD Government. BJD Government is guilty of chit fund loot," he said referring to the multi crore chit fund scam wherein allegedly 486 chit fund companies are involved. The HRD Minister alleged that "There are no teachers in government schools, no doctors in government hospitals and irrigation schemes are incomplete. In many areas there is acute shortage of drinking water". Mr Javadekar alleged that while Odisha was "poor when BJD came to power" but lamented that the state has remained poor "even after 18 years of BJD rule". "There is discrimination even in the administration of universal beneficiary schemes. Those who are from BJD are selected & other's not selected for beneficiary schemes," he alleged. The attack by BJP leader against Naveen Patnaik government is surprising in more ways than one as it comes just a few days after BJD lawmakers in Rajya Sabha had backed NDA nominee Mr Harivansh. In April 2017, the BJP had upped the ante against Naveen Patnaik regime and threatened to fight against it tooth and nail. The BJP national executive meet was hosted in Bhubaneswar and Prime Minister Narendra Modi had staged a road show as well. But since then there was a modest climb down in BJP's strategies in Odisha leaving two Union Ministers Dharmendra Pradhan and Jual Oram to do most of the talking. Naveen Patnaik-led BJD was part of NDA but aftermath anti-Christian violence and in the run up to the 2009 Parliamentary polls, it pulled itself out from the BJP-led conglomeration.