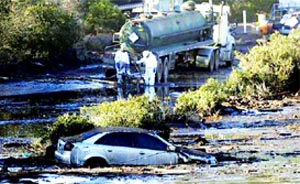 Agencies, Los Angeles The death toll from mudslides that devastated parts of California’s scenic Santa Barbara County rose to 19 on Saturday amid a massive influx of emergency crews searching for five people still missing. One missing person was found alive on Saturday but chances were dwindling fast that more survivors could still be located from the torrent of mud and debris that struck on Tuesday, said Santa Barbara County Sheriff Bill Brown.“While every hour it remains less likely we’ll find anyone alive, there remains hope,” he said at a news conference. Brown said a 19th victim had been found and named her as Morgan Corey, 25. Her 12-year-old sister Sawyer had previously been discovered dead after their home was swept away this week. Seven people had been missing at the start of the day, which saw about another 900 emergency personnel arrive in Montecito, north of Los Angeles, to join the relief effort under way by more than 2,100 personnel from local, state and federal agencies, including the U.S. Coast Guard, the U.S. Navy and the American Red Cross. The ramped-up rescue effort is in response to urgent requests for additional manpower made earlier in the week.“We need that number to effectively meet our objectives,” said Amber Anderson, a spokesman for the multi-agency response team. “To get people here takes time and we’re finally getting that request for influx.” On Friday, the sheriff’s office made a plea for information on any of the missing residents, who range in age from 2 to 62. The disaster struck on Tuesday after heavy rains soaked the area near Montecito, where vegetation had been denuded by the largest wildfire in California’s history. Sodden hillsides gave way, unleashing a torrent of mud, water, uprooted trees and boulders onto the valley below and killing victims aged from 3 to 89. The destruction covered 30 square miles (78 square km), the California Department of Forestry and Fire Protection said.Officials ordered residents in most of the southeastern corner of Montecito, which is east of Santa Barbara, to leave their homes for what was likely to be one or two weeks. Many fled to nearby Carpinteria, where local resident Tessa Nash said more than a few were communicating via a Facebook page called Carpinteria Swap, which is usually focused on the buying and selling of secondhand goods. These days, Nash said, it carries information about community-led blood drives and transportation tips.“We’re really joined together,” she said. “We’re affected here in Carpinteria in the sense that we’re taking these people in and a lot of people are out of work because they can’t travel. It’s a trickle-down effect.” Since the mudslide caused the partial closure of one of California’s most celebrated coastal roads, Highway 101, Nash, like many county residents, has been taking the train from the beach town into Santa Barbara proper for work every day. She said the carriages are standing room only, and that the conductors were not bothering to collect tickets.