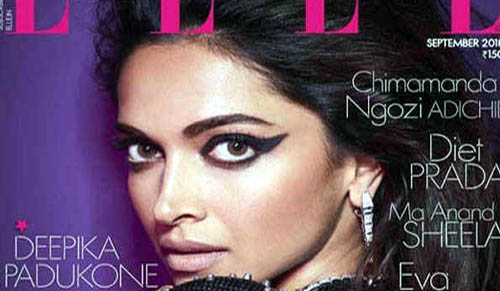 New Delhi, Celebrating the icons of change, global star Deepika Padukone unveiled the Elle magazine's latest issue which features the actress in a vintage avatar. The actress dons an astonishing look with bold eyeliner and a puffy hairdo, wearing a stunning black outfit. The actress has been a magazine favourite, stealing hearts with her drop dead gorgeous looks not only on Indian magazines but also international covers. Earlier, the actress mesmerised the world with her bold and rocking style statement at MET Gala and Cannes apart from her international magazine covers like TINGS London. Deepika Padukone also featured in the TIMES 100 most influential list and also raised a toast for the same. Deepika is very active on social media and the actress time and again treats her fans with insights from her day to day life. One of the most followed women not only in India but also in Asia. Deepika Padukone commands the love from her fans across the globe. Termed as the Queen of Rs 100 crore club, Deepika Padukone holds the most number of seven Rs 100 crore films, while her recent outing Padmavat clocking Rs 300 crore at the box office. With this Deepika was titled the first actress to have entered the 300 crore club with a woman led film.