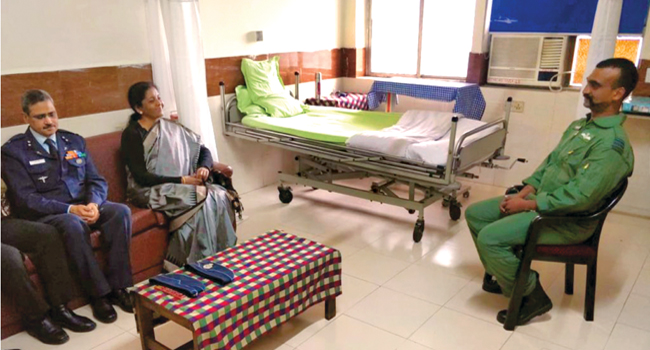 New Delhi, Defence Minister Nirmala Sitharaman on Saturday met the Wing Commander Abhinandan, who returned from Pakistan custody on Friday. According to sources, the valiant pilot is undergoing regular medical check up as part of operational procedures and cooling process. The Defence Ministry has applauded the Wg Cdr Abhinandan for his valiant discharge of duties during his custody in Pakistan and said the country has found "the best" of Indian Armed Forces in him. "For honour of the Nation, you kept duty ahead of your personal safety. Wearing India Colours on your sleeve, you showed calm and poise in adversity. Abhinandan you created history," went a tweet from the Defence Ministry spokesman's Twitter handle. " .....and in you we find the best of the Indian Armed Forces. Bravo Air Warrior, more power to you," it further said. President Ram Nath Kovind, the Supreme Commander of Indian armed forces, on Friday late evening welcomed the safe return of Wg Cdr Abhinandan Varthaman and said the nation is proud of his "courage and sense of duty". "Welcome home Wing Commander Abhinandan Varthaman, India is proud of your courage and sense of duty, and above all your dignity. Wishing you and our entire Air Force every success in the future" President tweeted. In a missive Prime Minister Narendra Modi also lauded Wing Commander Abhinandan for his display of exemplary courage. In quite an unusual outburst, Prime Minister tried to underline the strength of an emerging India and said - "India is changing...This country has the strength to change the word meaning in dictionary also. At one time the meaning of 'Abhinandan' used to be congratulations, now that meaning of "Abhinandan" will also change".