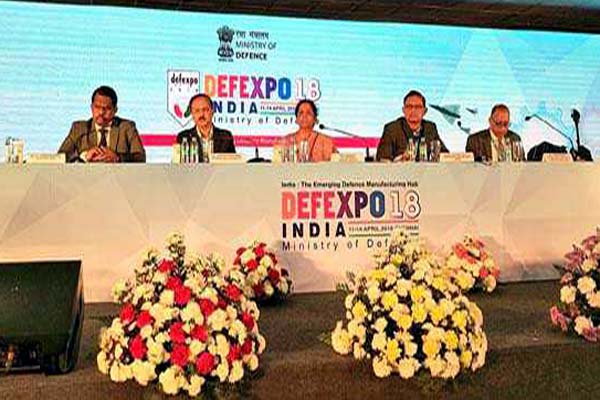 Chennai, Already ranked as one of the biggest importers of arms, India is showcasing its potential to manufacture and export defence equipment at this edition of Defexpo, said Defence Minister Nirmala Sitharaman here on Wednesday. Addressing a crowded press conference on the opening day of the four-day biennial mega event, being held on the East Coast Road on the outskirts of Chennai, she said the government this time invited major manufacturers of defence systems, equipment and producers defence related items to showcase their products. "This year we have a clear focus on India as a manufacturer of defence equipments, not just selling to India but with a potential to export. We have given a very big space for small and medium private sector units so that they get the apparent level playing field with the big defence manufacturers,’’ she told journalists. Ms. Sitharaman said the defence equipment and armament which the country seeks to export has to be first tested and used by the armed forces to assess if such equipment meets global standards and are export worthy. "I cannot imagine, forcing upon them, final call has to be that of the armed forces," she said. She said the Defence Ministry has to observe the fine line between the armed forces and defence production. She also pointed out that in the past two years the forces had utilised all the funds which were allocated to them under the budget. Defence Secretary Sanjay Mitra added the government had set aside 33 per cent of the capital budget expenditure for defence which was on the higher side. "Keeping Operational capability of armed forces in top shape is the always the first priority of the government and resources for the forces are never a problem," said Mr. Mitra. Ms. Sitharaman said that Defence PSUs like DRDO, BEL, HAL and others have different departments involved in research and development which is commercially viable. "It is a matter of extreme pride and a conscious decision to promote these institutions," she added. Pointing to the historical significance of holding Defexpo 2018 near the resort of Mahabalipuram, she said the exhibition has travelled to Southern India for the first time as Tamil Nadu has been earmarked as the State where one of the two defence industrial corridors are to be located. The other State is Uttar Pradesh. "It was from here that Chola ships sailed to South East Asia and showcased India’s naval prowess and in the process strengthened cultural and commercial ties in the Indian Ocearn Region," she said. Flanked by DRDO chief Dr. S. Christopher, Minister of State for Defence Subhash Bhamre, Defence Secretary Sanjay Mitra and Defence Production Secretary Ajay Kumar, the Minister disclosed that several countries have shown keen interest in India’s missile systems. "However, I cannot take any names now," she added.