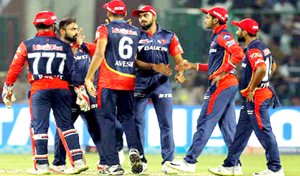 New Delhi, After several losses in the previous matches, finally Delhi Daredevils came out with flying colours on Friday match, played at Feroz Shah Kotla stadium against Kolkata Knight Riders (KKR) here. Delhi Daredevils won the match by 55 runs against Kolkata Knight Riders. Under the leadership of its new captain Shreyas Iyer, Delhi did a tremendous job in todays' match and finally got victory. Delhi made the highest score of 219 runs for 4 wickets in 20 overs, after Kolkata scored the highest score of 164 for nine wickets. This is the second win in seven matches of Delhi. This win also helped Delhi to lift itself above in the tally, while Kolkata, had to face a fourth loss in seven matches. Iyer scored 29 runs in the last over of the innings bowled by Shivam Mavi, which helped Delhi to score highest of this season. Delhi scored 76 runs in the last four overs. Iyer also became Man of the Match for his devastating innings.Iyer scored 93 not out with the help of three fours and 10 sixes in 40 balls, clinched match for Delhi.