Delhi: Four killed after fire breaks out in house 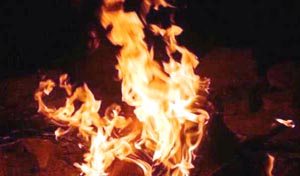 New Delhi, At least four people were killed and three others injured after a massive fire broke out on the ground floor of a house in Kohat Enclave of Delhi's Pitampura during the wee hours on Friday. According to an official of the Delhi Fire Services, a call was received at 0248 hrs regarding the fire, and ten fire tenders were immediately rushed to the spot. He said the blaze was doused at around 0400 hrs early this morning, adding four bodies were recovered, and three others were injured. The official said the fire broke out on the ground floor and later spread to the upper floors of the house. He said the cause of the inferno is yet to be ascertained.Police is at the spot and investigating the matter.