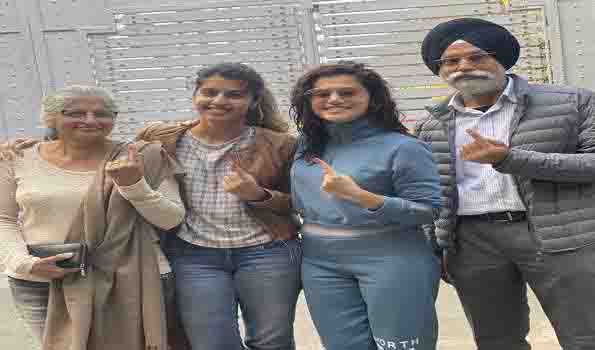 New Delhi, Bollywood actor Taapsee Pannu on Saturday cast her vote for the Delhi Assembly elections 2020 along with her family, and said that every vote counts. Taapsee has cast her vote along with sister Shagun and her parents. The actress flew down to her home city from Mumbai on Friday. Taking to micro-blogging site Twitter, Taapsee shared the picture of her family, with a caption,'Pannu Parivaar’ has voted. Have you?#VoteDelhi #EveryVoteCounts'.

An estimated voter turnout of 6.43 per cent was recorded till 1100 hrs in Delhi Assembly elections on Saturday. A total of 672 candidates are in fray. On the work front, Taapsee will be seen in Anubhav Sinha directorial ‘Thappad’. The film talks about domestic violence.