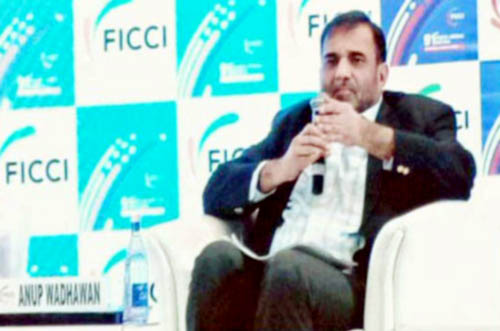 New Delhi, Despite some of the challenges faced by the external sector, the Indian economy has withstood the external shock better than the rest of the world, said Commerce Secretary Anup Wadhawan here on Saturday. Key Secretaries of the Government of India shared their perspectives on the issues and challenges faced by the industry and trade as the country marches towards building a new India.'Since 2015-16, despite high oil prices, rising interest rates and protectionism, India has been more or less stable due to strong policies,' Dr Wadhawan said. He, however, cautioned that the country may witness a slight "recessionary phase" in the near future.He said that the Indian export sector was way below its potential as compared to its size. Traditional commodities which are recession prone, have high weightage in the exports. There is a need to raise the level of diversification in export commodities and bring in more sophistication in the products exported, he emphasised. Critical driver for higher growth was competitiveness and the proposed new industrial policy aims to achieve this objective, said Department of Industrial Policy and Promotion (DIPP) Secretary Ramesh Abhishek. Addressing the 91st Annual General Meeting of FICCI, Mr Abhishek said ease of doing business, skill development and a robust innovation ecosystem were critical areas for Industry 4.0.He added that DIPP would like to work with Industry and other stakeholders as Team India for the implementation of Industry 4.0 agenda. Mr Subhash Chandra Garg, Secretary, Economic Affairs, Ministry of Finance, said the country was in the midst of a digital transformation and there was enormous opportunity in Infrastructure sector that needs to be tapped. He said the transition of the economy from agriculture to manufacturing and services sector needs to be accomplished to build the New India. There was a need to address environmental degradation, he said and added that there was reasonable assurance that inflation will be under control going forward. Mr Amit Khare, Secretary, Ministry of Information and Broadcasting, said that there were five significant features of the Information and the Broadcasting Industry- high growth, high employment generation, rapid technological change, self-regulation and private sector domination, according to an official statement here.