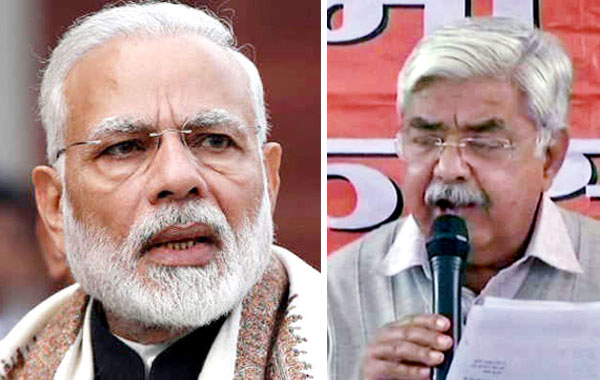 New Delhi, Notwithstanding statement from Prime Minister Narendra Modi that his government will discharge its 'responsibility' once Supreme Court decision on Ram temple comes, the VHP continued to mount its pressure on Wednesday saying Ordinance route is a must as Hindus will not wait for eternity. "We cannot wait for an eternity," said VHP leader Alok Verma commenting on Prime Minister's media interview in Tuesday, wherein he did not quite rule out the possibility of an Ordinance. Mr Verma said: "The Supreme Court hearing on Ram temple will not take place anytime soon as a bench has not been formed. We urge the government to bring an Ordinance for construction of Ram temple in Ayodhya". "A Dharam Sansad will be held during Kumbh where saints will decide what to do next," he further said. VHP, which spearheaded the temple movement in 1990s, has been insisting for an urgent executive order from the centre on construction of a grand Ram Temple at Ayodhya, where Lord Rama was born. The demand for construction of a Ram temple in Ayodhya gained momentum yet again late last year after the Supreme Court had adjourned the hearing on the Ayodhya case pertaining to Ram Janmabhoomi-Babri Masjid land dispute till January 2019. In his interview, Prime Minister flayed Congress for trying to delay the case over the years."Let the judicial process take its own course. Don't weigh it in political terms," he has said on the New Year day. "My appeal to Congress leaders and their lawyers is please do not make things prolong in this case," he said. The Rashtriya Swayamsevak Sangh (RSS) has described PM Modi's statement a 'positive step'. "We see the Prime Minister's statement on Ram Mandir as a positive step towards building the temple," RSS Sah Sarkaryavah Dattatreya Hosabale said in a statement. "The people of Bharat have reposed complete confidence and gave BJP the full mandate. The people of Bharat expect this government to fulfil the same promise during this tenure," he said making the Sanghparivar fountainhead's intent crystal clear.