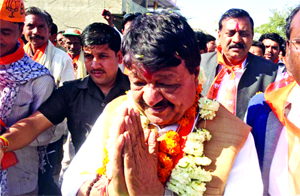 Chronicle Reporter, Bhopal BJP national general secretary and MLA Kailash Vijayvargiya has exuded confidence that his party would win the Kolaras by-poll on the basis of its development agenda and the popularity of both Prime Minister Narendra Modi and chief minister Shivraj Singh Chouhan. “ Kolaras is a clear win for us where we have put forward development as the main political plank. We are sure to win the by-poll despite all kinds of manipulations by the opposition parties. Prime Minister Narendra Modi and Shivraj Singh Chouhan are the faces of the BJP and hugely popular among voters,” said Kailash Vijayvargiya while addressing a workers’ convention at Piprai in Ashok Nagar under Mungawali assembly constituency.