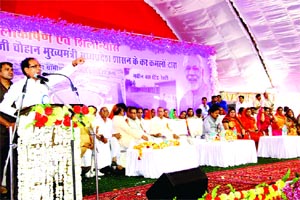 Chronicle Reporter, Bhopal Special steps towards women empowerment will be taken in Madhya Pradesh. Women self-help groups will be linked to Livelihood Mission to increase income of women. Fifty percent reservation will be given to women in government jobs. This was said by Chief Minister Shivraj Singh Chouhan while laying the foundation and dedicating various works at Rehti tehsil headquarter in Sehore district. CM Chouhan said that a special scheme will be launched from coming April 1 for women labourers working in the unorganized sector. Pregnant women labourers registered under the scheme will be given Rs 4,000 from 6 to 9 months of pregnancy. After childbirth Rs 12,000 will be deposited in her account. This work will be carried out in the urban areas through urban bodies and in rural areas through gram panchayats. The Chief Minister gave information about various public welfare schemes to the people. About Bhavantar Bhugtan Yojana, he told that farmers who do not wish to sell their produce immediately, they can store their produce in the warehouses and sell it when the market rate is high. Government will pay the rent for the storage. He said that the support price for wheat now is Rs 1735 per quintal. The bonus of Rs 265 on this will be paid by the state government. To fulfil the immediate needs of the farmers, arrangement is being made to pay 25 percent of the cost of the grain kept in warehouses. CM Chouhan said that the government’s priority is to provide pucca house to each poor person in the next three years. Chouhan told that 1121 pucca houses will be constructed in Rehti now. Poor persons will be identified in the entire state and houses will be constructed for them. The Chief Minister provided laptops to 11 bank sakhis on the occasion. CM Chouhan laid the foundation and dedicated 35 construction works at a cost of Rs 514. 26 crore on the occasion. This includes Mardanpur Group Water Supply Scheme at a cost of Rs 274.67 crore. Residents of at least 182 villages will be able to avail tap water facility through this scheme. Chouhan dedicated a new bus stand in Rehti. Among those who were present on the occasion were Sehore district minister in charge and Public Works Minister Rampal Singh, Chairman Forest Development Corporation Guruprasad Sharma, President District Panchayat Smt. Urmila Maretha, President Janpad Panchayat Smt. Vimla Sahu, Chairman Madhya Pradesh Warehousing Corporation Rajendra Singh Rajput, Administrator Apex Bank Ramakant Bhargav, public representatives and administrative officers.