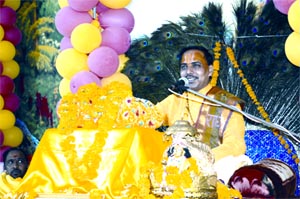 Chronicle Reporter, Bhopal The birth of Lord Krishna was celebrated at Nageshwar Dham Mandir at North TT Nagar during the weeklong Bhagwat Katha Mahotsav. With the birth of Lord, the pandal reverberated with the expressions of joy in praise of Lord. MP Alok sanjar and Shramshri president Rambabu Sharma were especially present on the occasion. Beginning today’s Katha, Pt. Chaturnarayan Shastri said the Lord is very peaceful. He is never angry. But when he gets angry, his anger is expressed against persons like Hirankashyap. Hirankashyap committed atrocities on his own son Prahlad as he refused to accept his father as God and worshipped Lord Vishnu. For the protection of his devotee Prahlad, he took the ‘avtar’ or incarnation of Narsingh and killed Hirankashyap. Pt. Shastri further said Lord Ram also killed Ravan to save his devotee. Ravan had kidnapped Sita Mata and Sita was worshipper of Lord’s feet. To end atrocities, Lord Ram killed Ravan. If there is no devotion in a person’s life then there is no beauty. The Lord is moved by love. For the sake of a small amount of butter, he stays with gopis because the Lord is touched by the love and affection shown by gopis. Pt. Shastri said we should see our own shortcomings and not of others. The birth of Lord Krishna was celebrated with great enthusiasm and devotion. When the organizer dressed as Vasudev reached the pandal holding newborn Krishna in a basket, the devotees celebrated and chanted in praise of Lord. Devotees swung the swing in which newborn Krishna lay.