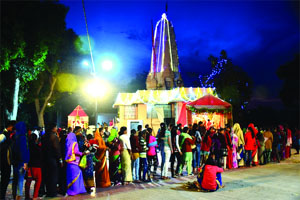 Chronicle Reporter, Bhopal Devotees drawn from different areas since morning thronged various Shiv Temples in the city and paid obeisance to mark Maha Shivratri celebrations with religious fervour and gaiety. Devotees thronged the holy Bhojpur Temple on the outskirts of the city and performed special Pooja of Lord Shiva.They made beeline at temples and waited for their turn to worship Lord Shiva. All temples witnessed huge rush of devotees. It was from early morning hours that devotees started going to Shiv temples. They offered flowers and other things to Lord Shiva and sought His blessings. On this occasion, temples were specially decorated. People also took part in other rituals at temples and also performed Rudrabhishek. Large number of people also went to Bhojpur to worship Lord Shiva. In comparison to any other days, Bhojpur witnessed huge rush of devotees. Long queue of devotees was witnessed at Bhojpur from morning till evening hours. Bhojpur temple is ancient temple constructed by Raja Bhoj. This time, Mahashivratri is of two days and hence many people had earlier observed Mahashivratri on Tuesday as well.Though rush of devotees was normal during the wee hours but swelled as the day progressed. The devotees offered flowers, Bel leaves, milk, curd, etc to the ‘Shivlingam’. Famous temples here witnessed unprecedented rush of devotees. The devotees for hours stood in long queues to offer prayers at the temples. Meanwhile, special arrangements were also made for night long prayers in the temples. Special ‘langars’ were also organised by religious bodies at temples.

On the eve of Maha Shivratri, the devotees of Lord Shiva took out impressive Jhankis, as ‘Shiv Baraat’, on Tuesday which passed through the main streets of city. Devotees also took part in Shiv Baraat and danced on the beats of drums. Many people wore the masks of ghosts and participated in Shiv Baraat. It is said that along with various gods, ghosts have also taken part in Shiv Baraat. The Shiv Baraat was taken out after performing religious rituals and pooja in the temple premises by devotees. A large number of devotees accompanied the Baraat. The people enroute greeted the Shiv Baraat by showering flowers on it. The devotees were also chanting the religious hymns and singing bhajans in praise of Lord Shiva.The people also offered soft drinks, juice, fruit and sweets to baraatis enroute. The bazaars were also fully decorated befitting the occasion.