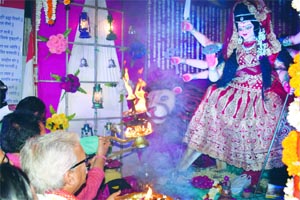 Chronicle Reporter, Bhopal Devotees thronged temples on the fifth day of the nine-day period of Chaitra Navratri on Thursday, to worship the Goddess. Besides little girls in the form of little Devis were also worshipped and Kanya Bhojs were organized. Chief Minister Shivraj Singh Chouhan also performed the puja of little girls on the occasion. The organisers of most of the community pujas being held in the city said that their preparations were in the final stage. Apart from the puja, some Durga puja committees in the city have planned to stage several cultural programmes, including musical soirees, dance and drama, to attract crowds to the pandals. The city is already in the festive mood with people flocking to the markets to buy new garments and the puja paraphernalia. The daily Puja is also organized followed by pushpanjali, bhog and bhog distribution. In the evening, aarti is held. Daily cultural festivities to enthrall the crowd with variety of programmes, including dance, dramas and plays, geet and ghazals, have been planned. A number of cultural groups are also likely to perform during the festivities.