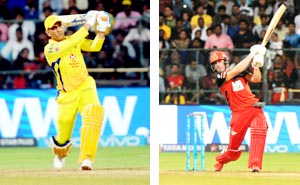 Bengauru, Chennai Super Kings waltzed to an impressive five wicket win against Royal Challengers Bengaluru by surmouinting 206 run target with two balls to spare in the IPL tie played at M Chinnaswamy satdium here om Wednesday. Indomitable M S Dhoni again led the team with a match winning knock of 70 off just 34 balls while Ambatti Rayudu came up with a quickfire 82 in 53 balls to anchor the stiff chase. The sold-out match between the arch arrivals promised the maximum as Virat Kohli led RCB amassed 205 for 8 after being asked to bat first by rival skipper Dhoni who took on his own hands the final assault and finished a game with a towering six off Corey Anderson with two balls to spare to the vociferous support of CST supporters. Batting first RCB amassed an impressive205 with Qunton de Kock hitting a blishering 53 off 37 balls aided by four sixes and AB Devillers again taking the centre stage for the Bengaluru side with a blistering 30-ball 68 hitting eight sixes and two fours. This came after Virat Kohli who opened the innings well fel for 18 off 15 balls. De Villeris goaded de Cock to add 103 runs in just 53 balls for the scond wicket to race to 138 forin the 14th over. But RCB lost two quick wickets at the sscore of 142 as Villiers and Corey Anderson (02) fell to South African spinner Imran thahir (2-35). This slowed down the innings but Mandeep Singh (32) tried to speed up the scoring rate but fell for 32 scored of just 17 balls. Dwayne Bravo took 2-33 late in the innings while Shardul Thakur (2-46) took the important scalps of Kohli and Mandeep. Facing a stiff target CSK began on a negative note losing Shane Watson (07) in the opening over by Pawan Negi but Consistent Ambatti Rayudu revealed. He added 42 runs with Suresh Raina who was out for 11. Ravindra Jadeja coming at number five was clean bowled for just 3 and CSK needed 132 to be scored off66 balls. Rahudu showed the way, punishing Mohammad Siraj and Pawan Negi hitting eight sixes and three fours, initially even as Dhoni to revealed hitting the RCB bowlers with a plomb. Rayudu and Dhoni took the sails out of RCB bowlers adding 101 runs of 59 balls with methodical hitting and the match looked all over but Rayudu left in the 18th over run out with a brilliant second by Umesh Yadav. With 13 balls left ultimately and 36 runs needed, Siraj floundered against Dhoni bowling thee wides in the penultimate over and Brawo hit Corey Anderson for a boundary and a four in the last over. Dhoni sealed the fate of the match with a towering six off the third ball of the last over. Brief scores: RCB 205/9  in 20 overs (Quinton de Kock 52, AB deVilliers 68, Shardul Thakur 2/46, Imran Tahir 2/35, Dwayne Bravo 2/33) lost to CSK 207/5 in 19.4 overs (Ambatti Rayudu 82, M S Dhoni 70 not out, Yazuvendra Chahal 2/26). CSK win by five wickets.