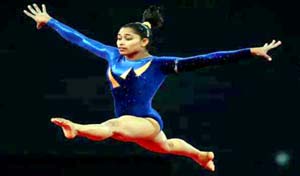 New Delhi, Indian star gymnast Dipa Karmakar who created history by winning gold in the FIG Artistic Gymnastics World Challenge Cup said, that the upcoming Asian Games is the toughest competition, but she is confident of winning medal in the multi-sport event. Dipa who returned back to India here in the capital after bagging gold in the vault event of FIG Artistic Gymnastics World Challenge Cup at Mersin, Turkey on Sunday, when asked about her preparation for the upcoming Asian Games, the gymnast talking to mediapersons said, "I know Asian Games are the toughest competition with countries like China, Japan, S Korea, Iran and Iraq but says she hopes to win a medal in the tournament. Meanwhile, Dipa, appreciated her coach and paramedics who helped her recover from injury, and also thanked Sports Minister and Gymnastics Federation for encouraging her to participate at a world sporting event.Dipa said, "back in action after two-year gap due to injury, has always been a challenging task for every sportsman." The gymnast is also part of the 10-member Indian gymnastics team in the Asian Games beginning from August 18.