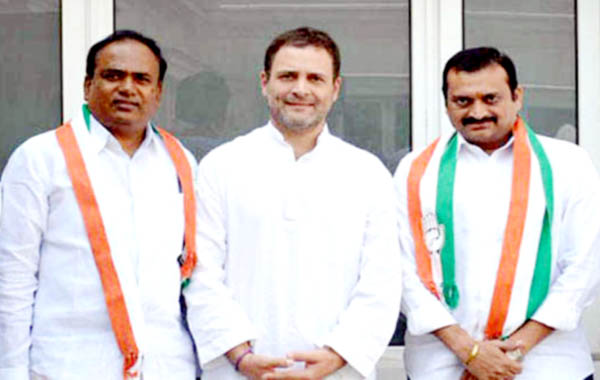 New Delhi, Amid growing dissatisfaction among the ticket aspirants in the Telangana Rashtra Samiti (TRS) after the party supremo and Chief Minister K Chandrasekhar Rao announced the list of 105 candidates, senior party leader and MLC Bhupathi Reddy on Friday quit the party and joined Congress. Tollywood producer Bandla Ganesh also joined Congress along with Mr Reddy in the presence of party president Rahul Gandhi here. Mr Reddy said he was not happy with the way the TRS was functioning and said he was insulted by others in the party. “TRS is ignoring all the principles on which it was formed. The party has neglected its leaders who played key roles in the formation of Telangana state,” Mr Reddy said. He also said he was willing to contest from Nizamabad rural constituency against TRS MLA Baiju Reddy Govardhan. The Chief Minister dissolved the Telangana assembly last week opting to go for early polls. However, in a recent development Chief Election Commissioner OP Rawat indicated that it may not be possible to hold assembly elections in Telangana along with four other states, which are scheduled for polls by the year-end. The Congress, Telugu Desam Party and the Communist Party of India had announced last week that they will form a grand alliance against TRS. According to sources, the leaders of these three parties met and completed the first round of talks.Meanwhile, the Chief Minister announced the first list of candidates for 105 of 119 assembly constituencies immediately after the dissolution of assembly. According to media reports, many leaders are expressing unhappiness over their names not figuring in the list and are contemplating switching sides.