Distribute residential pattas to landless persons in the form of campaign: Chouhan 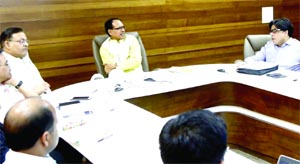 Chronicle Reporter, Bhopal More than 12 lakh mutation and property distribution cases and more than one lakh demarcation cases have been settled under a special campaign launched in the state for settlement of revenue cases. Besides this, more than 4.5 free Khasra and B-1 copies have been distributed in the state. Chief Minister Shivraj Singh Chouhan has congratulated the Revenue Department team for successful implementation of the campaign. CM Chouhan was reviewing the Revenue Department here today. Revenue Minister Umashankar Gupta and Chief Secretary B.P. Singh were present during the meeting.

No undisputed-mutation-property case pending in the state

It was told that after declaration of Rs one lakh award on undisputed mutation-property cases pending for more than a month, no case was found pending in the entire state. CM Chouhan said that the Revenue Department has done positive work in the interest of the common man. The department has accepted the goal as a challenge and given good results. The future targets fixed for the department should also be completed within the time limit. Chouhan issued instructions to distribute residential pattas to the landless persons in the form of a campaign. He said that by the end of September not a single eligible person in state should remain landless. A committee presided over by the Chief Secretary should undertake the work of investigation of cases of land allotment of various government ventures. This committee will also investigate the adequacy of land allotted to the different government ventures earlier. A special campaign should be launched to remove the faults of maps and khasras. The work of transforming vangrams to rajasva grams should be undertaken on priority.

It was told at the meeting that this year Rs 1880 crore has been approved for drought relief and Rs 300 crore for hailstorm relief. The pending case of Bhopal city merger agreement has been settled by giving concession in postponed mutation, property distribution and Nazul NOC to 13 villages of Bhopal. The pattas of Sindhis and other displaced have been distributed. Detailed instructions of distribution of residential pattas to the landless have been given. The minimum limit of assistance fund to farmers affected by natural calamities has been increased from Rs 2,000 to Rs 5,000 and maximum limit has been increased from Rs 60 thousand to Rs one lakh 20 thousand. A drafting committee has been constituted for suggestions of amendment in the land-revenue code. The recruitment process of 9,300 patwaris is in progress. Formation of 43 new urban tehsils and 7 new rural tehsils has been approved. While 550 new posts of naib tehsildar have been approved, appointment orders on 270 posts have been released. Use of web-GIS has started once again after changes. Smart phones have been available to all patwaris. An integrated mobile platform will be implemented from the month of May for the entire revenue team. Tenders for Land helpline call centre have been issued.

It was informed that Nazul pattas will be renewed and rates will be simplified. An easy online facility will be started for payment of land-revenue, Nazul rent and premium for the common man. Farmers will be given information about land through Kisan app. Patwaris will be given laptops to work online. Naib tehsildar recruitment test for patwaris, revenue inspectors and clerks will be held after a gap of 21 years in the coming month of June. The entire procedure of Revenue Department will now be online. The department will provide ‘Kahin-bhi-Kabhi bhi” facility of making land record available to the common man. Honorarium of landless kotwars will be hiked. Principal Secretary Revenue Arun Pandey, Principal Secretary to the CM Ashok Vernawal, S.K. Mishra, Hariranjan Rao, Principal Secretary Revenue Manish Rastogi and other senior officials were present during the meeting.