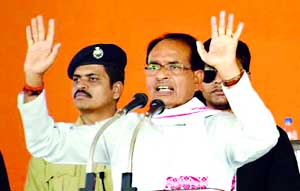 Chronicle Reporter, Bhopal, Chief Minister Shivraj Singh Chouhan has said that the Mukhya Mantri Jan-Kalyan (Sambal) Yojana is a scheme which will bring prosperity and transform the lives of the poor. This scheme will bring a new dawn in the lives of the poor and will bridge the gap between rich and poor. Benefits of the scheme will be distributed to beneficiaries on June 13 at the Janpad headquarters in the state. Distribution of benefits to the beneficiaries will continue at the gram panchayat and urban body level. Chief Minister Chouhan was addressing tendu patta collectors conference and benefit distribution programme of scheme’s beneficiaries of Satna and Katni district at Satna. Chouhan also laid foundation stone of development works of nearly Rs. 76 crores and construction works worth Rs 61 crores. The Chief Minister said that through Jan-Kalyan Yojana the government stands with the poor. Cheques of financial assistance of Rs 4 thousand and Rs 12 thousand will be given from April 1 to May 30 to those beneficiaries in whose houses either boy child or girl child upto two children is born. Rs 2 lakh assistance will be given in case of natural death in the family of any beneficiary and Rs 4 lakh assistance will be given in case of accidental death. For last rites Rs 5 thousand will be provided to the beneficiary in cash. The Chief Minister said that a committee of five persons from the public will be formed at the gram panchayat and urban body level for monitoring and supervision of the scheme. Efforts will be made to enhance employment resources by linkage of self-help groups with banks. Praising the employment fair that was held today at Kymore of Katni district, Chouhan said that employment fairs will be organised in all districts. The Chief Minister said that there has been abundant production even in drought situation as a result of irrigation facility and adequate electricity supply to farmers of the state. Arrangement is being made to obtain electricity payment from the poor at the rate of Rs 200 per month from July 2018. He said that the Ayushman Bharat Yojana will be implemented from August 15, in which free treatment of every poor person will be ensured. Chief Minister Chouhan said that every landless poor will be given pattas and will be made land owners. In the next four years, the kachha and dilapidated houses of 37.5 lakh poor people of the state will be converted into pucca houses. Chouhan praised Collectors of Satna and Katni for registration of labourers of the unorganised sector in record number in the Mukhya Mantri Jan-Kalyan Yojana in Satna and Katni district. He distributed registration cards of unorganized sector labourers, residential pattas, forest rights certificates and assistance amount under Mukhya Mantri Swarozgar Yojana and free gas connections of Ujjwala Yojana to 5-5 beneficiaries each from Satna and Katni district in a symbolic form. MP Ganesh Singh said that CM Chouhan has prepared and implemented outstanding schemes for the welfare of every section. MLA Shankarlal Tiwari also addressed the programme. Distribution of over Rs 8 crore bonus to tendu patta collectors began CM Chouhan began the distribution of tendu patta bonus amount of Rs 8.21 crore for year 2016 in the accounts of 31 thousand 841 cardholder families of 42 primary forest produce committees of Satna district. He also started the distribution of one pair shoes to 36 thousand 893 tendu patta collectors and one pair slippers and sarees to 37 thousand women collectors besides 73 thousand 917 water bottles to all collectors. Among those present on the occasion were Food and Civil Supplies Minister and Minister in Charge Satna district Om Prakash Dhurve, Minister of State for Micro, Small and Medium Enterprises Sanjay-Satyendra Pathak, Mayor Smt, Mamta Pandey, District Panchayat President Satna Smt. Sudha Singh, District Panchayat President Katni Smt. Mamta Ranglal Patel, Chairman Welfare Board Smt. Padma Shukla, MLAs Shankarlal Tiwari, Maihar, Narayan Tripathi and Sandeep Jaiswal, Chairman of Vindhya Development Authority Subhash Singh, Member Backward Class Commission Dayanand Kushwaha, Member of State Women’s Commission Smt. Anju Singh, District Panchayat Vice President Dr. Rashmi Singh and other public representatives.