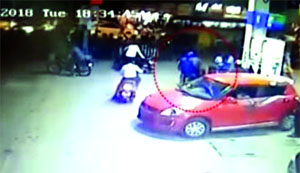 New Delhi Pandemonium scenes prevailed in the Lok Sabha twice during Zero Hour on Wednesday when members from Trinamool Congress in West Bengal and DMK in Tamil Nadu clashed with the ruling side over separate issues. Raising the issue of certain remarks made by Puducherry Lt Governor Kiran Bedi, DMK floor leader TR Baalu said the anti-Tamil people and “nauseating remarks” were not acceptable. Speaker Om Birla quickly cut him short saying the conduct of a Governor or Lt Governor could not be discussed in Zero Hour. “You are a senior parliamentarian.....you know the rules,” Mr Birla told Mr Baalu, who has also been a Union Minister previously. Several DMK members, including Dayanidhi Maran and K Kanimozhi supported their party leader and maintained that he must be allowed to ventilate his grievance in the House. There was objection from the ruling side including from Parliamentary Affairs Minister Prahlad Joshi and his colleague Arjun Ram Meghawal and the Speaker called up the next member to raise the matter under Rule 377 during Zero Hour. Anguished DMK members rushed to the Well of the House and at one point of time, Congress member from Sivaganga (also in Tamil Nadu) Karthi Chidambaram was seen supporting the DMK colleagues and he also rushed near the well. Amid anti-government slogan shouting by DMK members, two Parliamentary Affairs Ministers were seen in intense discussions with Defence Minister Rajnath Singh and Law Minister Ravi Shankar Prasad and consulting rule books. Parliamentary Affairs Minister Mr Joshi said any conduct of those in constitutional positions cannot be discussed during Zero Hour. “There has to be a proper and substantive motion,” he insisted. The Defence Minister, also deputy leader of BJP in Lok Sabha, echoed similar sentiment and quoted Rules and Procedures of the House and said if DMK members wanted to discuss the matter, they should come with a “substantive motion”. The Speaker also said if a motion is brought, he will consider it. Earlier at the start of the Zero Hour, Trinamool leader Sudip Bandyopadhyay maintained that BJP member Locket Chatterjee made personal attack on West Bengal Chief Minister Mamata Banerjee in the House on Tuesday and such remarks should be ‘expunged’. “Ms Banerjee is not a member of the House and hence the remarks should be expunged....How will the ruling side reach if there is an allegation and such remarks against Prime Minister (Narendra Modi) in the West Bengal assembly,” he said. Mr Bandyopadhyay’s remarks were fiercely countered by BJP members like Saumitra Khan, Arjun Singh and S S Ahluwalia. Several Trinamool members including Kalyan Banerjee, Shishir Adhikari and Aparupa Poddar too were up on their feet making anti-BJP remarks. Amid raucous scenes, the Speaker also urged the members not to indulge in slogan shouting and blame game in the House and at one point of time said - “Isey Bangal Vidhan Sabha mat banao (Please do not make Lok Sabha, the Bengal assembly)”.