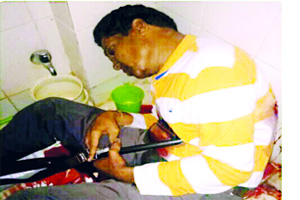 Only son had died 3 yrs back, was recently diagnosed with cancer

Chronicle Reporter, Bhopal A doctor committed suicide by shooting self dead with his licensed gun on Monday morning under Koh-e-Fiza police station. The incident took place at about 11 am. The deceased doctor was a resident of Munshi Premchand campus. The doctor’s wife and daughter were in the house at the time of incident. Preliminary investigation has revealed that the doctor was under mental stress. The FSL team conducted inspection of the spot. Police have handed over the body to family members after conducting post-mortem. According to the information received from the police, Dr. Kamlesh Kumar Unia, 62, lived with his family at Munshi Premchand campus. He was posted at Narsingarh Hospital. At 11 am his wife Shakuntala and daughter Neelam were at home. Dr. Unia locked himself in the bathroom on the ground floor, while his wife and daughter were in a room on the first floor. Dr. Unia shot self dead with his licensed gun after locking him in his room. When the family members heard the sound of gunshot, they rushed downstairs. Wife Shakuntala knocked the door of the bathroom and broke it open when there was no response. She found Dr. Unia lying dead in a pool of blood. The gun was lying close to his body. The kin informed 108 and the police. Police said it appears a case of suicide.

Only son had died three years back

Dr. Unia was under mental stress. His only son Bunty had died of liver sirosis three years back at the age of 28. Only son’s death had devastated the doctor but he had adjusted to the loss and was moving ahead in life. But four months back he was diagnosed with cancer. He was under tension after this. His daughter Neelam had done LLM but did not start practicing as she suffered from polio.

Was posted at Narsingarh for 15 years

Deceased’s relative Narendra Katrolia said Dr. Unia had done MBBS from Gajraja Medical College. He had been posted at Narsingarh government hospital for last 15 years. Two of Dr. Unia’s brothers are doctors and are posted in Datia, while the third brother is DSP. DIG Dharmendra Chaudhury said the doctor shot self on the chest with his licensed gun. Koh-e-Fiza police is conducting investigations into the case. Statements of the family members are being recorded to ascertain exactly what prompted the doctor to take the extreme step.