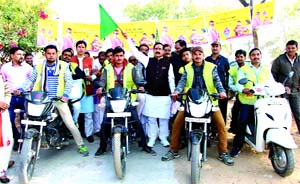 Chronicle Reporter, Bhopal Minister for Public Relations, Water Resources and Parliamentary Affairs Dr. Narottam Mishra started Pulse Polio campaign from Rajghat Colony of Datia. He administered pulse polio drops to the children. Dr. Narottam Mishra also flagged off a motor cycle rally, organized with an objective to make the pulse polio campaign successful. Moreover, Dr. Mishra visited village Anandpur of Gram Panchayat – Agora of district Datia and unveiled Dr. Ambedkar’s statue. Boddha saint were also present on the occasion. He mentioned that Baba Sahab Bhimrao Ambedkar was a God like human being. Teerth sthals have been made by the Madhya Pradesh and Union Government in New Delhi, Mhow and London besides 5 other places in order to make the Baba Sahab’s memories everlasting.